Back to normal in Eldoret, other N. Rift towns

• Parents busy getting reading to take their children back to school on Thursday after a shutdown because of polls. 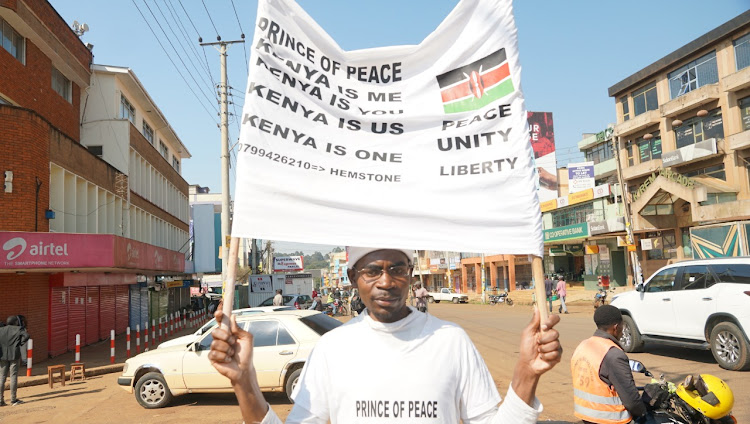 A peace activist carries a banner with pace messages in Eldoret after the August 9th elections
Image: BY MATHEWS NDANYI

Residents of North Rift region have resumed normal business after a week-long lull due to fear of election violence.

Parents on Wednesday were getting ready to take their children back to schools, which were shut before the August 9 general election.

Security teams deployed in most areas have been withdrawn but Uasin Gishu county commander Ayub Gitonga said all officers were still on high alert, despite continuing with normal security duties.

“As security teams we are fully on duty and we assure residents  their safety is being taken off as they go about their business," Gitonga said.

He said security patrols will remain in place, especially in areas identified as critical, to ensure criminals do not take advantage of any loopholes.

Gitonga said so far no serious incidents had been reported in the region throughout the election period. He said he hoped the same would prevail as the country emerges from the elections period.

“We thank residents for keeping peace and unity throughout the elections," he said.

Most residents said all they want was peace so they can go on with normal activities.

Spokesman for parents in the region James Kirwa said most were facing financial challenges and frequent closure of schools was taking its toll.

“We hope the disruption we have witnesses for a very long time will now come to an end.  Parents have carried huge burdens since the onset of Covid-19.

"It's time the government helps to ease the situation," Kirwa said.

He said the economy was in a poor state and few parents could afford daily meals. Kirwa urged schools to understand and not to send children home for school fees.

“We hope the new government that comes in will help ease the burdens we face just, just as they all said during campaigns," he said.

Travel disruptions were reported in Eldoret, Kitale, Iten and Kapsabet as many people were also travelling back to work as as schools reopened.

Education CS George Magoha had directed schools reopen on August 18 after the shutdown when the IEBC used some schools and polling and tallying centres.

Representatives of the Kenya National Union of Teachers in North Rift led by Julius Sang urged parents to bear with the difficulties and take their children back to school.

“We know parents are going through hard economic situations but children have to go back to schools. We also urge the government to support the schools adequately so that learning can go on smoothly," Sang said.

They welcome new school reopening date of August 15, instead of 11.
Counties
1 month ago

Clergy urges poll losers to use courts to address complaints