VOTE WITH YOUR FEET

North Rift will be peaceful despite hotspot label — clergy

Bad leaders elected by people who do not vote, bishop said.

• At a prayer meeting Christian and Muslim clerics prayed for peace and said they were confident it would prevail.

• Security has been strengthened and resident were told not to worry, that the multi-agency team was there to keep the peace. Residents urged to vote. 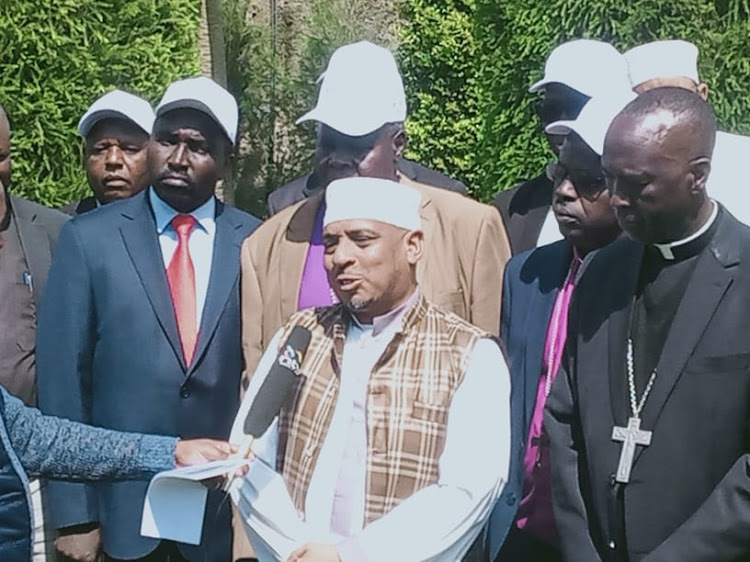 LET THERE BE PEACE: Clergymen led by Supkem chairman of North Rift Abubakr Bini during a press briefing in Eldoret on Monday, August 8.
Image: JESSICAH NYABOKE

Clergymen from North Rift say elections will be peaceful, although the region has been identified as a possible hot spot for election violence.

The National Cohesion and Integration Commission labeled that region and five other counties and clusters as possible trouble spots on election day and afterward. Security has been strengthened in the area.

Speaking during an interfaith prayer in Eldoret on Monday, they said they have conducted peace campaigns in the region and believe God will not allow violence.

Bishop Dominic Kimengich of Eldoret Catholic diocese appealed to residents to maintain peace even after the announcement of election results by the Independent Electoral and Boundaries Commission.

"As servants of God, we are happy with the security team moving around the region to ensure a peaceful election," Kimengich told the press.

Bishop Kimengich urged residents of communities at odds to exercise their democratic right to vote. He said bad leaders are elected by people who do not vote.

He said for now there is relative calm in Kerio Valley so residents have nothing to fear and should turn out in big numbers to vote.

"There is peace among the warring communities who have been fighting for decades and residents should come out in large numbers and vote for leaders who will lift the country to greater heights," the bishop told the press.

He said the Catholic Church will assist those in need during this period.

"We are not saying they will be violence but we have put measures in place to help in case of any eventuality that will require our help, the bishop said.

ACK Bishop Christopher Ruto urged all politicians to be ready to accept the outcome of the election. If they are not satisfied, they should follow due legal process and not resort to violence.

"Politicians who will lose should not incite youths to cause mayhem and violence which may even led to loss of life," the bishop said.

North Rift chairman of the Imams and Preachers of Kenya (CIPK) Abubakar Bini advised Kenyans to accept whoever is elected and get on with their lives.

"All four presidential candidates are our children. As a country, we must be ready to accept whoever will be declared a winner by the IEBC," Sheikh Bini said.

Kapseret subcounty commissioner James Wambua, who represented the security team during the prayer meeting, assured residents of their safety during and after elections.

"We have put in place proper mechanisms to maintain law and order during this period. Whoever attempts to disrupt peace will face the full force of the law," he said.

He also told residents of Eldoret town not to fear the presence of many security officers, saying they are only maintaining peace during the election.