• Buzeki said he was happy that, except for a few incidents, the campaigns had largely gone on well.

• Independent candidates have given UDA candidates a tough time during the campaigns. 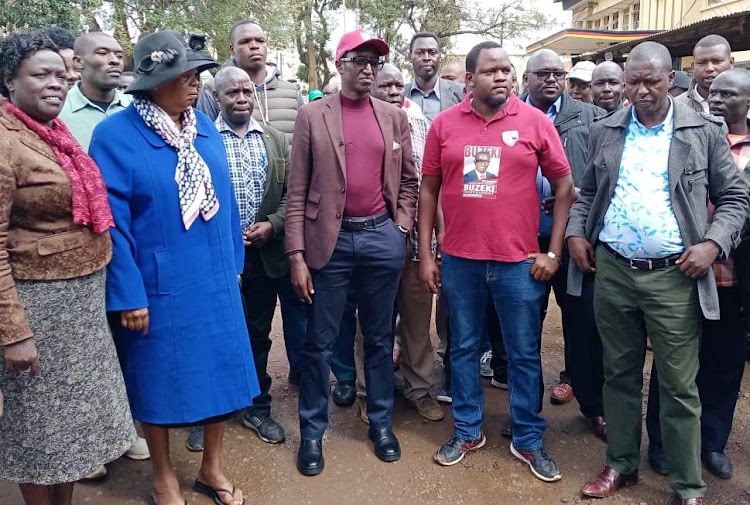 Independent candidate for Uasin Gishu governor Bundotich Kiprop Buzeki has expressed confidence he will win in next Tuesday's election.

On Saturday, Buzeki will hold his final rally in Eldoret town to wrap up a high octane campaign with UDA rival Jonathan Bii, also known as Koti Moja.

“We believe all is well this time around and the win is on our side," the wealthy businessman said.

He is making a second attempt to win the seat after narrowly losing to outgoing Governor Jackson Mandago in 2017.

Buzeki said he was happy that, except for a few incidents, the campaigns had largely gone well.

“We urge Kenyans in this county and elsewhere to turn out and elect good leaders who will take the country to the next level,” he said.

Buzeki said he will use the final rally to insist on peace and unity in the county branded a hotspot where election violence is possible.

“We believe our people are mature and will not participate in retrogressive acts of violence,” Buzeki said.

He is among many independent candidates who are running for election in the region and have given UDA candidates a tough time.

UDA candidates in the North Rift have said, however, they are confident of winning all seats.

They said they will ensure a high voter turnout in support of Deputy President William Ruto's presidential bid on a UDA ticket.

Bii led his colleagues in calling for peace and unity during and after the election.

“We are God-loving people and we urge all Kenyans to turn out and vote and ensure peace and unity prevail in all areas,” he said.

Rutto, who is running against Dr Swarrup Mishra in Kesses constituency, said they are not scared of independent candidates running for most of the seats in the region.

“We have done wide campaigns and our people are set to vote six-piece in favour of UDA,” Bii said.

The focus will be on several key positions.

There is wide discussion of the possibility of independent candidates upsetting UDA candidates in the region considered a stronghold of DP Ruto and his party.

The other major battle to watch will be between Elgeyo Marakwet Senator Kipchumba Murkomen, who will be defending his seat through UDA. Outgoing Governor Alex Tolgos will be going for the same seat through Jubilee.

Buzeki said that despite Ruto’s campaign, they will win seats because residents do not want leaders imposed on them through UDA.

“Our people are not electing parties but leaders with the capacity to deliver better service,” he said.

Other hotly contested parliamentary seats include Nandi Hills, where MP Alfred Keter is running for reelection as an independent against Benard Kitur of UDA.

In Mosop, MP Vincent Tuwei is battling with Abraham Kirwa of UDA.

In Uasin Gishu, which is DP Ruto's home county, Kesses MP Mishra is running as an independent against UDA' Rutto. In Moiben, MP Silas t is vying against UDA's Bartoo.

Deny they are being used and residents don't like being told whom to vote for.
Counties
4 months ago

There are fears independents pose major threat to UDA dominance in Rift Valley.
Counties
4 months ago

I'll give Mandago a run for his money, says senator hopeful Kemei

Independents wave not subsiding, if anything, it's energised after rebuffing Ruto.
Counties
4 months ago