I'll campaign against Buzeki so he doesn't succeed me – Mandago

• Analysts say either Buzeki or Bii will win the seat.

• Buzeki is vying for the governor's seat on an independent ticket. 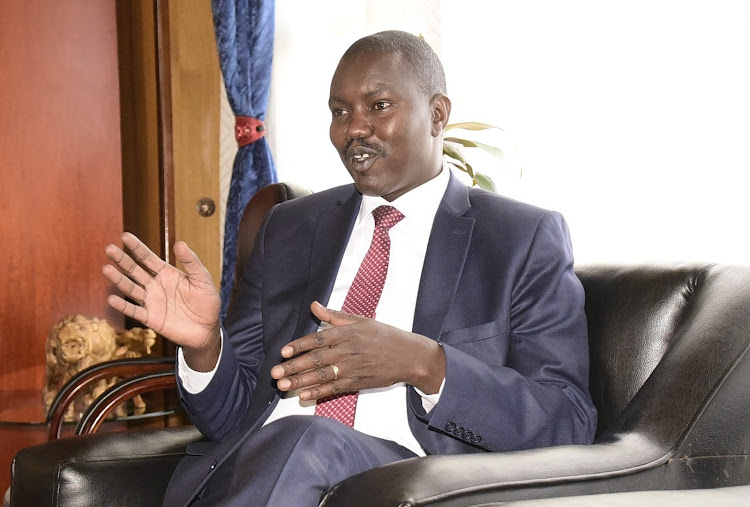 Uasin Gishu Governor Jackson Mandago in his office in Eldoret on July 2, 2022
Image: BY MATHEWS NDANYI

He said he wants to ensure businessman Buzeki does not succeed him next month.

Mandago, who is completing his second term as governor of Uasin Gishu, is urging residents to vote for UDA candidate Jonathan Bii, popularly known as Koti Moja, as the next governor.

Mandago has accused Buzeki of being among those behind claims that he was training militia to cause chaos in the county ahead of the election.

Buzeki recently accused Mandago of scheming to have his relative take over the governorship in the county. He claimed that Bii is Mandago's cousin.

“This man Jonathan Bii is not even my distance relative. The only thing I know about him is that he has been vying for a parliamentary seat for long without success. Please vote for him so that he can take the county to the next level,” Mandago said.

He spoke during a function at his office on Saturday. Mandago said Bii has the capacity to lead the county to greater heights.

“I wish Buzeki was in the Senate race because I would have defeated him very early,” the governor said.

Buzeki has however dismissed Mandago’s threats terming the governor a failure during his tenure.

“I'm not scared of him because in any case he is the cause of problems  our people are facing in Uasin Gishu. I will focus on telling our people to elect me because I have a vision for the county but not a relative to Mandago,” the businessman said.

Buzeki is vying for the governor's seat on an independent ticket.

Analysts say either him or Bii will win the seat.

“He should stop those night meetings which he has been using to try and confuse our people," the governor said.

But Kihara laughed off the attack, saying he was not a politician and would not engage in any exchanges with the governor.

Stop bothering me to quit for UDA, Buzeki tells Ruto

I'm in governor's race to win as independent, he tells DP and allies.
Counties
1 month ago

• DCI is investigating claims after Mandago was summoned to Nakuru alongside Uasin Gishu assembly speaker David Kiplagat and Cheptiret-Kipchamo MCA ...
Elections 2022
1 month ago

The document claimed 25 men were being trained at an agricultural institute.
News
1 month ago