PRESIDE OVER PASSING OUT PARADE

The President has not been to the North Rift for years after falling out with Ruto. North Rift is Ruto's political backyard

• Uhuru will be in Eldoret on June 29 to preside over a passing out parade at Moi Barraks Recruits Training College.

• Unconfirmed reports indicate he may also commission some projects initiated by his regime in the region considered DP Ruto's backyard. 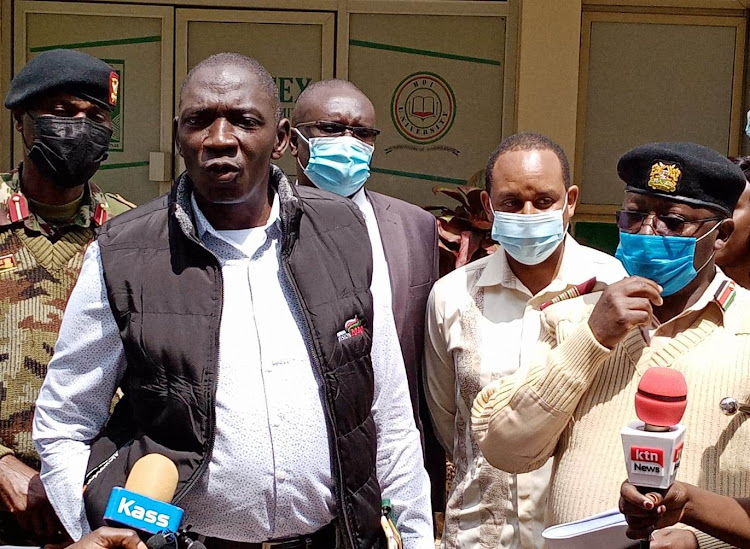 Government spokesman Cyrus Oguna at Rivatex in Eldoret on June 21, 2022. He is with Uasin Gishu county commissioner Stephen Kihara
Image: BY MATHEWS NDANYI

President Uhuru Kenyatta is next week expected to visit North Rift where he will preside over the passing out parade at Moi Barracks Recruits Training College in Eldoret.

The passing out parade will take place on June 29.

The President is expected to inspect national government projects initiated under his regime in the region.

Uhuru has not been to the North Rift for years after falling out with Deputy President William Ruto. The North Rift is Ruto's political backyard.

Uhuru has not had any other public functions there except the annual passing out parade at Moi Barracks.

A tentative plan for the visit indicates that after presiding over the passing out parade, Uhuru will commission a hospital put up by KDF in Soy near Moi Barracks.

He will also commission the Sh3.5 billion Eldoret Southern Bypass, which by last week was more than 92 per cent done.

During the last election campaigns, Uhuru unveiled construction work on the project which is funded by the African Development Bank (AfDB).

The two did not, however, talk about Uhuru’s expected visit.

“The project is almost complete and just a few final touches are being done before commissioning soon,” Kihara said.

Uhuru is also expected to tour Nandi county, where he is scheduled to visit the home of athlete Eliud Kipchoge, and open a library put up in honour of the runner.

It’s not clear if DP Ruto will be present during the visit or what role his allies will play when Uhuru is in their turf.

The bypass is largely located in Kapseret constituency where area MP Oscar Sudi has been one of the harshest critics of President Kenyatta.

Jubilee deputy secretary general and Cherangany MP Joshua Kutuny declined to speak about the planned tour by the head of state.

The President is also expected to commission some water projects in Uasin Gishu and Elgeyo Marakwet, but the plans have yet to be confirmed by the State House.

Some sources said Uhuru may only preside over the passing out parade and leave without any other engagements.

During past passing out parades, Uhuru usually flies direct to Moi Barracks and back to Nairobi, by-passing Eldoret town.

Azimio plan to edge out Ruto in battle for majority seats

Regions where William Ruto is leading

Ruto's lead in Central has dropped below half, to 49.4 percent
News
1 week ago

They say Azimio ticket will get 40% of the votes in their N. Rift region.
Counties
1 week ago

Observers say some independents so strong it will take DP's hand to tip scales.
Counties
1 week ago
“WATCH: The latest videos from the Star”
by BY MATHEWS NDANYI
Rift Valley
23 June 2022 - 22:00