Governor says his rivals have ganged up, chosen non-Maasai running mates to deny him votes

• They blamed the media for failing to report what they called Lenku’s continued attacks on non-Maasai communities in Kajiado.

• “Kajiado leadership is not a retirement scheme, Nkedianye, Metito, and Manje should retire," Lenku said. 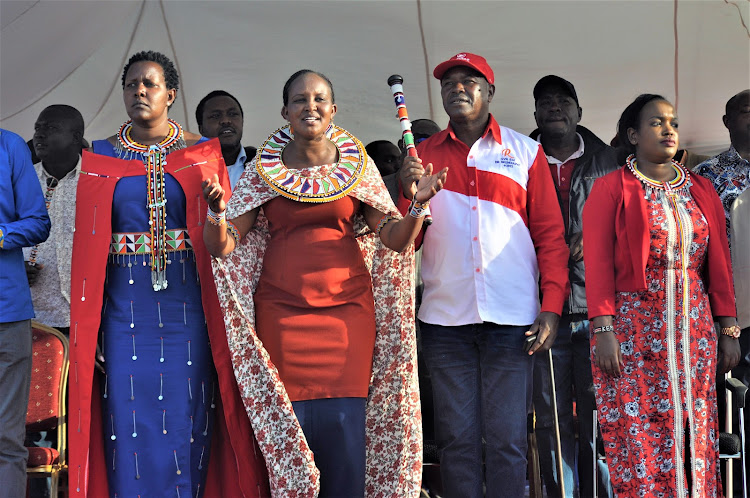 The two also blamed the media for failing to report what they called Lenku’s attacks on the non-Maasai communities.

MP Metito called on the NCIC on Wednesday after receiving former Lenku supporters from the Ilkitoip age set in Inkiito, Keek-Onyokie ward.

Lenku has made similar remarks twice in Kimuka, Ewuaso, and in the Matapato area of Kajiado Central, they claimed.

Lenku accused Nkedianye of picking a non-Maasai as his running mate to deny him votes.

Kajiado North MP Joseph Manje is Nkedianye’s running mate in the general election. He comes from the largest vote basket in Kajiado that supported his failed re-election bid in 2017.

Lenku also accused President Uhuru Kenyatta of attempting to make him drop his Maasai running mate, Martin Moshisho, while he (Lenku) was in Jubilee. He then decamped to ODM.

Metito has picked Judy Pere from Kajiado North as his running mate. Lenku is worried that the two candidates will lock him out of the vote basket region that overwhelmingly supported his election in 2017.

Governor Lenku on Wednesday told Nkedianye and Metito to stop whining and prepare to go on retirement.

“Kajiado county leadership is not a retirement scheme. Nkedianye, Metito and Manje should retire and go home in peace. Lenku and the youth have answers for this county,” Lenku said during a youth function at KCB grounds.

In a rejoinder on Thursday, Nkedianye said that during his tenure as governor after taking over from Olkejuado county council in 2013, he installed all the requisite foundations to give life to the county.

“I paid all the bills owed by the former county council, I distributed water to all the urban centres, I installed security lights in all major towns, organised annual vaccination of livestock, and even built and stocked all the county hospitals,” Nkedianye said.

The former governor said there was nothing left in 2017 of what he had accomplished and called Lenku a failed leader who has nothing to offer.

Nkedianye on Tuesday received 200 defectors from UDA, who supported Lenku’s election in 2017.

Metito has also received more than 300 members from the Lodogishu community in Matapato South. The community ditched Lenku for allegedly abandoning them after his election in 2017.

Nkedianye calls for peaceful campaigns ahead of elections after clearance

He said he ceased his campaign as a show of respect to the Memusi family.
Counties
2 weeks ago

They say Azimio ticket will get 40% of the votes in their N. Rift region.
Counties
1 week ago

IPOA to probe shooting of four in Kajiado

The deaths occurred when police allegedly opened fire on demonstrating members of the public.
News
3 weeks ago
“WATCH: The latest videos from the Star”
by KURGAT MARINDANY Correspondent
Rift Valley
16 June 2022 - 22:00