• They stormed Eldoret town with a series of rallies, pledging to ensure the election period would be peaceful, residents would remain united. 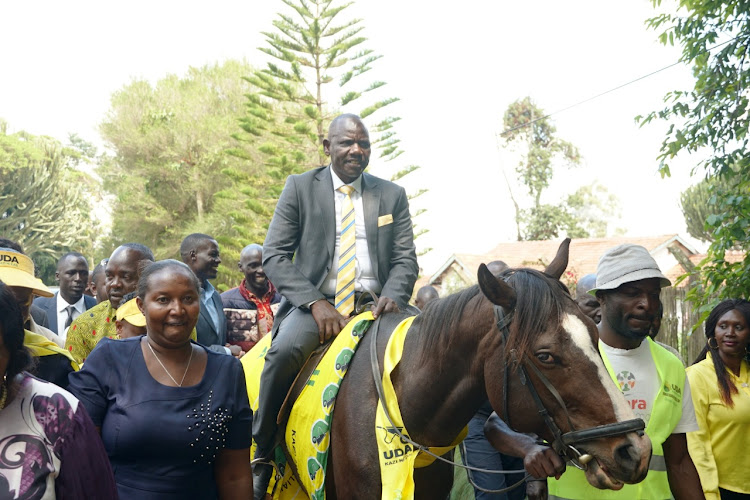 UDA candidate for Uasin Gishu governor Jonathan Bii has been cleared by the IEBC, setting stage for a three-horse race in DP William Ruto's home county.

But Bii rode into town on a horse draped in UDA colours of yellow and green, signifying he is the only horse in the race.

They immediately stormed Eldoret town with a series of rallies, pledging to ensure the election period would be peaceful and residents united.

“There are those who have claimed  Uasin Gishu is a violence hot spot but we are going to prove them wrong by ensuring we go through the polls peacefully," Bii said.

He is called Koti Moja because he often wears the same coat or jacket. Originally, his adversaries criticised him, saying he only owns one coat.

Then he and his supporters picked up on the nickname, just as kutangatanga, originally an insult, was used with pride by Ruto's supporters in Jubilee. It suggests the common man.

Bii expressed confidence he would triumph and succeed Governor Jackson Mandago who is completing his term.He will run for Senate in the county with slightly more than  460,000 registered voters.

He will face independent candidate Bundotich Kiprop Buzeki and former CEO of the Agricultural Development Corporation William Kirwa. Buzeki and Kirwa were also cleared by the IEBC.

Bii described himself as the only horse in the race, terming his rivals weak. He symbolically rode a horse on his way from the IEBC offices at Kenmosa to Eldoret town.

He is backed by close allies of  Ruto led by Mandago and Kapseret MP Oscar Sudi. Bii said the UDA candidates in the region would campaign as a team to ensure victory at all levels.

“I want to assure all residents of Uasin Gishu the campaigns will be very peaceful. After that we will form an all-inclusive county government that will include all communities," Bii said.

The region is largely cosmopolitan and more than a third of the voters are from non-Kalenjin communities. Bii pledged to improve the business environment in the town to attracts all investors.

Kiprop Bundotich Buzeki last Saturday had campaigned in the town.

He promised that if elected he would cut all licence fees and other charges by 10 per cent to ease the burden on small-scale traders, including hawkers and boda boda operators.

Buzeki said he had identified an investor who would put up a six-floor building to house the town's retail market.

“We want to bring in more investors so the county will make more money from other sources, instead of relying on overtaxing boda boda riders and hawkers," Buzeki said.

He will face UDA candidate Jonathan Bii, popularly known as Koti Moja, in the race to succeed Mandago
Counties
6 months ago

Says he wants to transform county into a wealthy region with unique environment for flourishing trade and jobs.
News - Page 1
6 months ago

Winner Jonathan Bii tells critics 'I told you so'