•A prayer rally on Sunday in Eldoret turned into a bashing ground for the independents  termed sell-outs being used to undermine the DP in his home region. 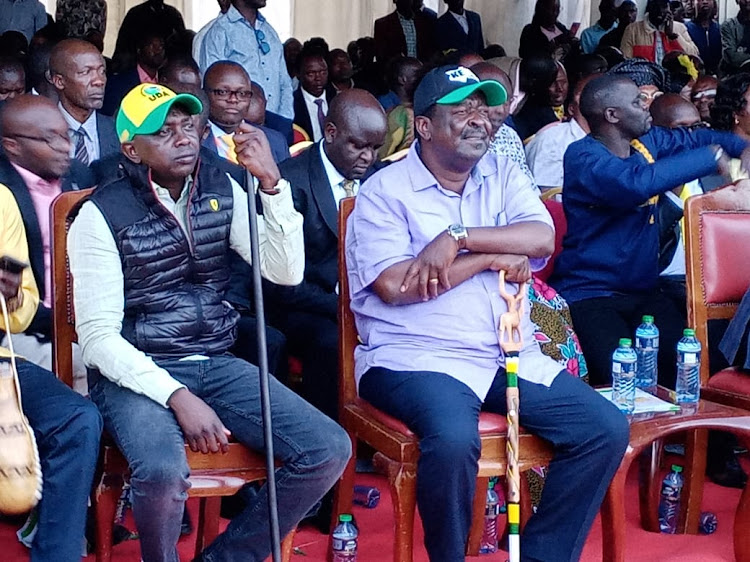 Mudavadi with Kapseret MP Oscar Sudi at the prayer rally in Eldoret on May 15
Image: MATHEWS NDANYI

Deputy President William Ruto’s allies have criticised independent candidates who will be facing off against UDA nominees in North Rift during the August 9 elections, saying voters should reject them.

A prayer rally on Sunday in Eldoret was turned into a bashing ground for the independents who were termed sell outs being used to undermine the DP in his home region.

“These are the people who have been attending night meetings to undercut the DP and they should not be allowed to get any seats in this region at all,”MP Barasa said.

Ngeno spoke at length on the independent candidates, terming them detractors who are part of those scheming to sabotage the DP’s ambitions.

The leaders called for a three-piece voting pattern for UDA in the region. Nandi and Uasin Gishu, which are Ruto’s strongholds, have many independent candidates following complaints of massive interference in the party’s primaries.

ANC leader Musalia Mudavadi was the chief guest at the prayer meeting where he welcomed the appointment of Rigathi Gachagua as Ruto's running mate in the Kenya Kwanza team.

Mudavadi said the choice would strengthen the team.

"Our ship has now sailed off with Ruto as our captain and we want a win in round one," Mudavadi said.

He said the Kenya Kwanza team had planned early enough and the appointment of Rigathi was a unanimous decision.

"Those on the other side thought we would quarrel  but we are determined to ensure Kenya comes first,"Mudavadi said.

He said Kenya Kwanza was now on the highway to victory, which would come on August 9.

"We want both Raila and President Kenyatta to retire peacefully and go home. Kenyans do not want a leader who would be controlled by use of remote control," Mudavadi said.

He urged residents of the region to come out in large numbers so that Ruto's win will be with huge numbers.

"We don't want to give a chance to people who are used to going to court to dispute election results,"Mudavadi said.

He urged the IEBC to ensure the polls will be free and fair.

He cautioned those in government not to use chiefs and other administrators to interfere with the elections.

Mudavadi urged residents of the region to ensure they vote for only Kenya Kwanza candidates so Ruto's government will be strong.

He said Kindiki would play a leading role in government if DP is elected.

He also thanked Mudavadi for standing with DP Ruto at his hour of need.

"When the time comes, we will also stand with you, our brother Mudavadi," Sang said.

Sudi urged all residents of Uasin Gishu to maintain peace and unity during the elections period.

The UDA nominees and officials led by Uasin Gishu Governor Jackson Mandago and senator for Kericho Harun Cheruiyot joined the crowd in song and dance after Gachagua was named running mate.

"We are happy the DP has finally named his running mate and we will stand with Kenya Kwanza  all the way to victory,"Mandago said.

Ngeno said Rigathi bears the marks of struggle and has gone through the challenges of fighting to liberate Kenyans.

He said the appointment of Rigathi as Ruto's running mate had complicated the arithmetic for Azimio.

"We are now assured of a Kenya Kwanza win. Whoever they appoint in Azimio may only change the time [it takes us to] win," Cheruiyot said.

Uhuru wants to be kingmaker and kingpin in 2022