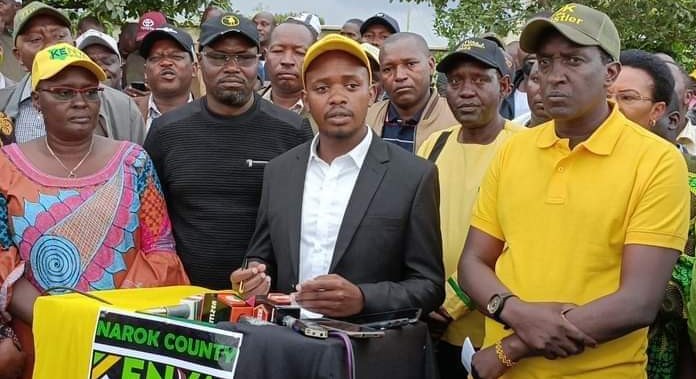 Ntutu, who is running on the UDA ticket, said he found an individual with whom he can work together to deliver quality services to the people of Narok.

“I wish to announce the nomination of the next deputy governor who will work closely with me and the team to deliver victory in the elections,” Ntutu said on Monday.

Speaking during the ceremony at Zebu Hotel in Narok town, Ntutu said Kirui was picked after a thorough scrutiny of the candidates on the shortlist.

“The announcement is the product of a professional and excellent panel of experts who took the whole of last week to interview a number of candidates who had shown interest in this position and settled on Engineer Kirui,” he said.

The aspirant added picking a youthful leader is a clear indication he has trust in the leadership of young persons.

“The unveiling of Engineer Kirui reminds me of my previous campaign in 2017 where I went for a running mate of the same age,” Ntutu said.

“The two opportunities I have granted to young people demonstrates my commitment to empowering and working with them," the governor aspirant said.

"I assure the youths that I will always have you in my plans and vision. Youths were at the frontline of my campaign in 2017, they still are today and I promise you that I will not let you down.”

Ntutu ’s move is seen as another tactic in the scramble for the Kipsigis votes that are distributed across all the four subcounties of Narok.

The Kipsigis community forms 40 per cent of the total population in Narok county and comprises a substantial number of registered voters’ in the community.

Ntutu will face Narok North MP Moitalel ole Kenta, who is seeking the seat on an ODM ticket.

This is the second time Ntutu is aiming for the governor's position.

The first time was in 2017 when he challenged incumbent Samuel Tunai using the Chama Cha Mashinani party, but lost.

Ntutu served as MP for Narok West constituency between 2013 and 2017.

Tunai said Ntutu will unite all the people.
Counties
2 months ago

We'll not miss you in Azimio, Ledama tells Mutua after deal with Ruto

"Enjoy a black out in the next government," Ledama said.
News
1 week ago

Aspirant says the move is undemocratic and voters should be allowed to decide who the next senator will be.
News - Page 8
1 week ago
“WATCH: The latest videos from the Star”
by KIPLANGAT KIRUI
Rift Valley
10 May 2022 - 22:00