•“When I take over as the fifth president of the Republic of Kenya, I will ensure that everyone will be issued with title deeds,”  presidential aspirant Raila said.

•“I will also introduce a social welfare scheme to protect widows, single mothers and divorcees from poverty. They will receive government stipends of Sh6,000,” Raila said. 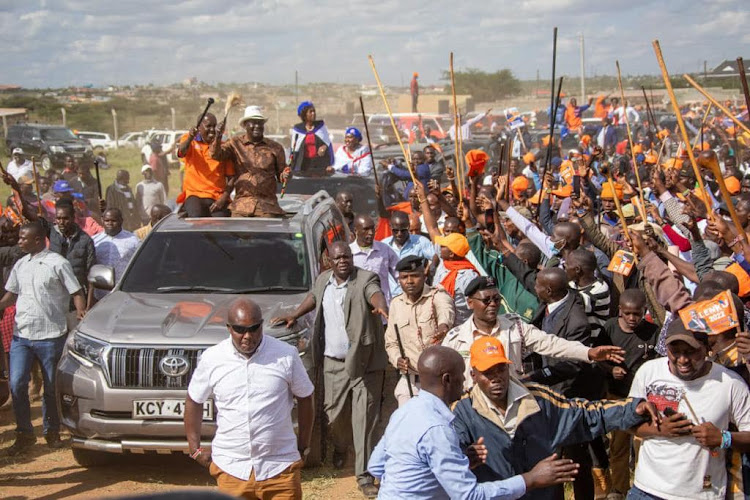 Raila, who addressed a rally in Kajiado on Monday, said the Maasai have suffered historical land injustices since the colonial days.

“When I take over as the fifth president of the Republic of Kenya, I will ensure that everyone will be issued with title deeds,” Raila said.

He said land titles alone will never put food on the table, and he will also ensure  the Maa people will have money in their pockets.

He said he would increase county revenue allocations whilst revisiting the Building Bridges Initiative that sought to have county allocations pushed to 35 per cent.

“They killed the BBI that had good intentions for this country. If the BBI had passed, the counties would have received a fair share of devolution money,” Raila said.

The Azimio la Umoja presidential candidate said once he is elected he will ensure that equitable shares to the countries are raised from the current 15 per cent to 35 per cent of the national budget.

He said once enough money is given to the counties, health systems, issues of water and roads will be fixed.

“I will also introduce a social welfare scheme that will protect widows, single mothers and divorcees from poverty. They will receive government stipends of Sh6,000,” Raila said.

Raila also told the Maa community that once he takes office after the August 9 general election, he will immediately introduce a livestock insurance scheme to protect their stocks from devastating droughts.

Speaking during the event, Jubilee’s director of elections, David Murathe, said he is aware Kajiado has two Azimio la Umoja governor candidates and nether of them is the preferred candidate of the coalition.

“You have invited us to come to Kajiado today, and we will come back again when invited by the other Jubilee governor candidate,” Murathe said.

Murathe said ODM and Jubilee are among the 26 other parties that have joined hands to support the Raila's election and the two parties each have a governor  candidate.

Others who spoke at the rally include Kitui Governor Charity Ngilu, Peter Keneth, Nominated Senator Judy Pareno and Junet Mohamed.

Raila heads to Kajiado as Ruto takes campaigns to Samburu

These campaigns are in bid to rally as many as 50+1 votes ahead of the August 9, General Elections.
News
2 weeks ago

Says the issue was now in the past and told the Azimio brigade not to cling to it for votes
News
2 months ago
“WATCH: The latest videos from the Star”
by KURGAT MARINDANY Correspondent
Rift Valley
10 May 2022 - 22:00