Ruto and Wamalwa calmed the crowd, said it was a meeting to hear residents' needs

•Governor had started by saying he had decided to throw his weight behind Ford Kenya secretary General Chris Wamalwa’s governor's bid. 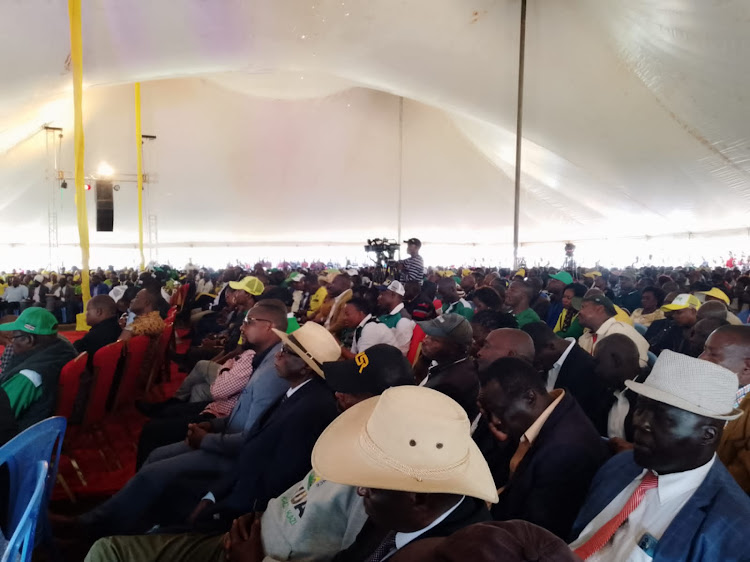 He was speaking at an event for Deputy President William Ruto who calmed the crowd.

The governor had started well by saying he had decided to throw his weight behind Ford Kenya secretary general Chris Wamalwa’s governor bid for the August 9 election.

He said it was only the Deputy President who would end the cycle of tribalism and help unite all Kenyans by giving everyone an opportunity to work and better their lives.

"I ask my supporters and the general public who believe in my cause to rally behind this energetic, trusted, tested and proven young man who has served this constituency well," he said.

"Do not allow yourselves to fall into the traps of the coiling animal together with another one calling himself Kwesule who means little to this county. I want you all to support Deputy President William Ruto’s presidential bid," he said.

[Reference is to Raila as a coiling animal and kwesule the name of a bird that gives directions. This is what agitated the crowd]

The audience immediately broke into boos, most of them picketing, including boda boda riders shouting, "Toka umetuumiza kwa miaka 10.

This prompted Wamalwa to take over the microphone and calm the youths who were overheard saying the governor had done nothing to alleviate their suffering during his two terms.

Khaemba’s woes did not end there. Boda boda operators, jua kali artisans, teachers, artists, people with disabilities, farmers, salon operators and others jeered him during the the Trans Nzoia economic forum at the Kitale Club.

The Deputy President who addressed the forum downplayed the incident noting the countrywide forums were a way of involving  citizens in deciding on the projects they want.

“Kenya Kwanza administration is changing the conversation from politicking to an issue-based agenda where the people decide the projects that are beneficial to them,” he said.

The DP said the coalition’s administration will aim to restore the ailing economy by pumping more than Sh50 billion into the informal sector as well as another Sh100 billion which he said will forever change the country’s economic set up .

“Kenya Kwanza is not interested in sharing positions but tackling issues that affect the common mwananchi and stop this madness of some people who think Kenyans are fools," Ruto said.

The DP said he will be reaching out to all Kenyans through such forums, adding that it was the responsibility of those at the bottom to decide what they want the government to do for them.

ANC leader Musalia Mudavadi urged the people of Trans Nzoia to rally behind the DP and all Kenya Kwanza aspirants during general election.

Ford Kenya leader Moses Wetang'ula hit out at the government for failing to cushion Kenyans against the high cost of living.

“It is immoral for the government of the day just watching Kenyans suffer as prices of commodities shoot up.  The Kenya Kwanza government will bring relief to all citizens in the coming few months," he said.

He lauded the model as the best in uplifting the living standards of the poor.
News
2 weeks ago

He promises to establish 5,000 housing units in every shopping centre.
News - Page 6
2 weeks ago
“WATCH: The latest videos from the Star”

Ruto and Wamalwa calmed crowd, said it was a meeting to hear what residents need.
Counties
2 weeks ago
by DAVID MUSUNDI
Rift Valley
09 May 2022 - 22:00