• The animals bought from residents under the emergency off-take aims to  provide relief food and lesson pastoralists' burden in searching for water, pasture. 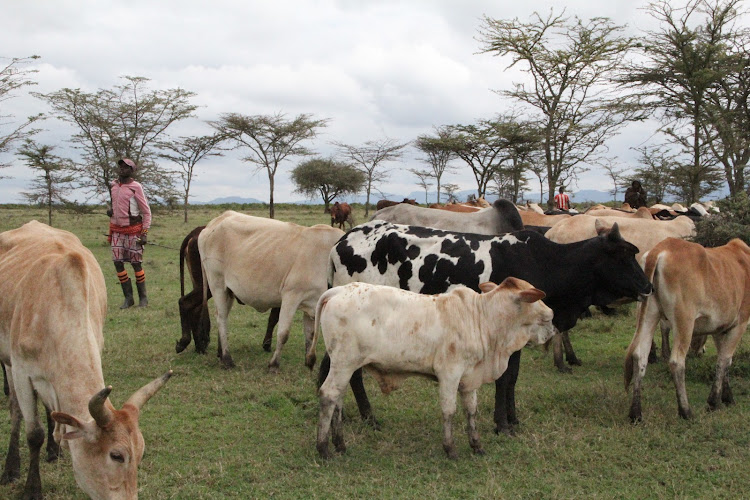 FOOD FOR THE HUNGRY Livestock in field at Segera location in Laikipia North subcounty over the weekend.
Image: ELIUD WAITHAKA

The national government on Monday started buying, slaughtering and distributing meat of 804 heads of cattle to starving families in Laikipia county.

The animals bought under the emergency government off-take is meant to provide relief meat to drought-stricken families. It also lessens the burden of pastoralists' searching for pasture and water.

The eight subcounties are targeted because they are the worst-hit by drought.

The slaughter will target Mukogodo East, Mukogodo West, Segera, Sossian, Tigithi, Salama, Umande, and Olmoran wards where animals are emaciated and people are week from hunger.

National Drought Agency regional coordinator Guyo Iyya told a county steering group in Nanyuki that the government is buying a cow for Sh15,000.

“We shall target the weak animals for slaughter as a way of cushioning the pastoralists from further losses and at the same time feed their families with the meat,” Iyya said.

The Kenya Red Cross will pay for the animals bought under the programme. It will benefit special institutions, people with disability, displaced families, households headed by women and children nursing mothers and children younger than age five.

The meeting chaired by Laikipia East deputy county commissioner Patrick Muli heard relief committees in the villages had been formed to oversee the distribution of the meat.

One cow will be shard by 12 households. A sheep or goat will be given to four households.

He told the meeting the emergency off-take criteria was guided by  vegetation condition index analysis of the affected areas, animal body score, resource-poor households and unproductive animals such as old males and females.

The exercise follows President Uhuru Kenyatta during his Mashujaa Day speech directing additional fund be released to alleviate the effects of drought in communities dependent on livestock.

According to the National Drought Management Authority, Laikipia has 25,900 people in need of food assistance, most of them pastoralists.

Over 6,000 livestock mostly cattle have died in Lamu since the start of the drought.
Counties
6 months ago

NDMA says mandate and funding has been handed to Ministry of Livestock instead of them.
Counties
6 months ago