Rehabilitation of Mau water tower gets a boost 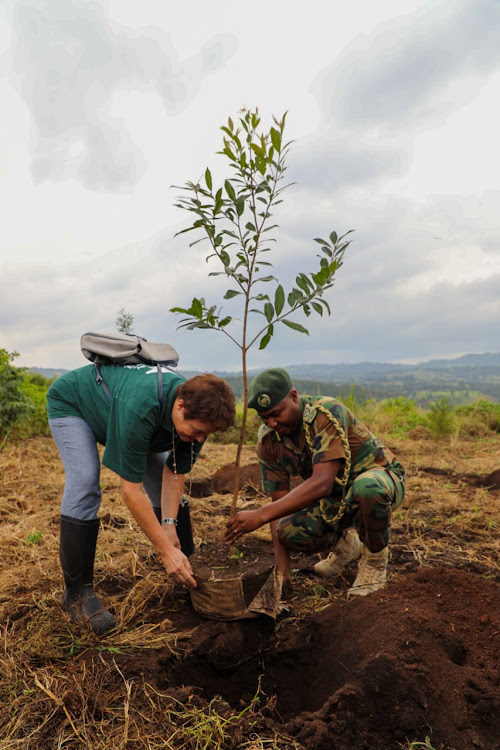 Kenya Forest Service through its innovative partnership model called Adopt-A-Forest Framework took part in the launch of the project.

Adopt-A-Forest framework is one of KFS strategic management tools for the attainment of the 10 per cent tree cover by 2022.

Kenya’s forests cover stands at 7.2 per cent but the state wants it increased to 10 per cent by 2022.

To achieve this, some two billion trees will have to be planted and raised between now and then at a cost of Sh48 billion.

KFS Chief Conservator Julius Kamau participated in the launch of the Mau Reforestation Project on Wednesday, where the Green Belt Movement  and the French government, through the French Development Agency have adopted a forest block dubbed "French Corner" for rehabilitation and restoration.

“We are calling upon other organisations and agencies to come forward and complement our work,” Kamau said.

The French Development Agency will be providing resources for rehabilitation of the forest that is a critical water tower.

Kamau was joined by the French Ambassador to Kenya and Somalia, Aline Küster-Menager to launch the project whose theme is "Reimagining the Future; Healthy and vibrant planet for all."

The 1.3 million Euros project is a great partnership opportunity for restoration of critical water towers and forest ecosystems targeting areas in Dundori, North Nandi and Tinderet forest which all form part of the expansive Mau Forest Ecosystem.

Those who spoke during the launch noted local communities'  through Community Forest Associations would benefit through the project by earning income through planting and tree seedlings maintenance activities.

The Chief Conservator of Forests, while appreciating the project partners, said CFAs will directly earn an income through the project by providing tree seedlings which will be used for the restoration of the identified forest blocks, hence providing an economic cushion to the forest-dependent communities at a time when Covid-19 pandemic has adversely affected vulnerable economies.

Kamau said over 50 entities have adopted more than 80,000 acres in the last two years.

The Kenya Defence Forces, through the Environmental Soldier Programme, has adopted 123 acres in Ngong Hills, Kibiku and Ololua forests. It has planted 55,000 seedlings.

Many other institutions have also adopted various forests.

The Mau Forest complex is the most important water tower in the country, supporting millions of livelihoods nationally, regionally and internationally.

The complex is the largest closed-canopy forest ecosystem in Kenya and one of the five major water towers covering an area of 1,12 million acres.

The water tower is a major catchment for 12 major rivers that feed Lakes Turkana, Baringo, Nakuru, Natron and Victoria.

Some sections of the forest such as Maasai Mau had encroachements.

The first evictions of squatters happened in July and August 2018 and affected 2,400 settlers in Nkoben and Kass Fm areas.

A profile of families done in 2010 found out that 716 people had title deeds, while 4,439 had allotment letters and sale agreements.

Some 2,741 had no documents to support their claims to forest land.