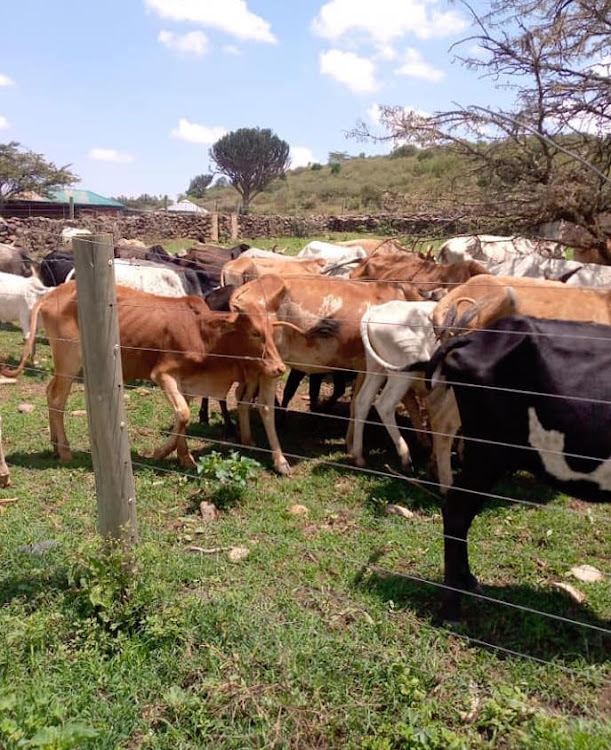 CATTLE RUSTLING: Part of the recovered animals in Laikipia on October 9.
Image: NPS

The government has ordered all non-residents within Laikipia county’s security operation area to leave as part of efforts to enforce peace and stability in the region.

Interior Cabinet Secretary Fred Matiang’i said on Tuesday an immediate enhancement of the ongoing security operation will be undertaken in the affected area.

He said additional special forces and equipment under the heightened command will be deployed to the operation.

More security personnel were ferried to the area to launch a new operation on Wednesday.

"The government notes with grave concern that despite its efforts to enforce peace and stability in Laikipia, hardcore bandits continue to take advantage of the prevailing drought situation in neighbouring counties to commit criminal incursions," he said.

This came a day after three people were shot dead in the area and a fourth was injured by gunmen in a failed cattle rustling incident.

Matiang'i said despite the enhanced presence of security teams, criminals are still trying to challenge the government’s resolve to restore normalcy and the economic livelihoods of residents.

He said this will not be tolerated, adding that a special command team to monitor and continuously review the operation to rid the area of criminal elements, has been put in place.

The Sunday attack prompted police headquarters to also announce that teams on the ground were reviewing their approach to areas that were initially perceived to be at low risk of attacks. This, they said, will ensure lives and properties are equally protected as those in high-risk areas.

Matiang'i also issued a statement on Tuesday following a meeting with security officials.

The military is among multiagency teams on the ground conducting the operation.

Their deployment followed the visit to the area by security chiefs in September led Matiang’i, Chief of Defence Forces Gen Robert Kibochi and Inspector General of police Hilary Mutyambai.

They camped in the area for three days after President Uhuru Kenyatta ordered the operation to be carried out within a week.

The operation started with the declaration of a dusk-to-dawn curfew in Laikipia Nature Conservancy after the country’s top security organ meeting at State House, Nairobi.

Matiang’i said Laikipia Nature Conservancy and its environs had been immediately declared as a disturbed area and therefore a security operation zone.

He also gazetted a new subcounty in the Ol Moran area and named it Kirima to tackle insecurity.

Further, he said, a training base for elite police units will be established in the area to enhance police presence and serve as a buffer zone between Laikipia residents and invaders from neighbouring counties.

The security chiefs landed in the area as multiagency teams intensified operations to flush out gunmen on private ranches and who are blamed for at least 10 deaths, including three police officers, and displacement of thousands who are now in churches and schools.

The attackers have been torching houses and other amenities, prompting heavy security deployment.