Senate, residents say Sh570m is too much, building dilapidated, space too small

• Uasin Gishu governor and assembly served with Senate resolutions against the purchase of run-down Sh570 million building of NBK.

• County needs office space in one location. Senate and residents say it should build an office block on one of the parcels it owns, at much lower cost. 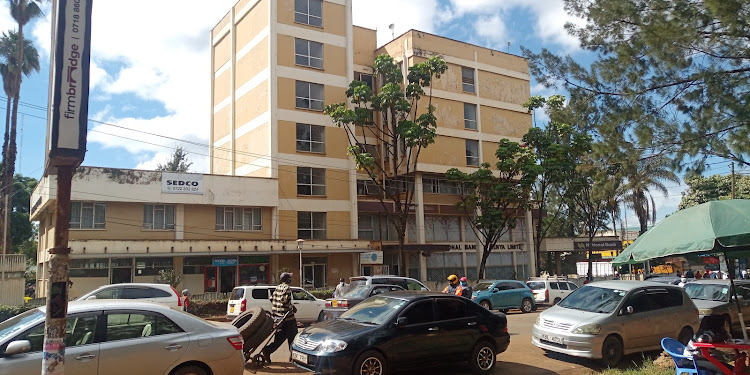 VALUE FOR MONEY? The National Bank of Kenya building in Eldoret on March 31.
Image: MATHEWS NDANYI

The Senate has directed Uasin Gishu county to stop the controversial plan to buy the National Bank of Kenya building in Eldoret for Sh570 million.

Governor Jackson Mandago’s administration and the county assembly were served with Senate resolutions against the purchase.

Deputy Speaker Hosea Lamai read the resolutions to the assembly.

Lamai did not say what action the assembly would take on the report. Last year, the assembly approved the controversial purchases, with only eight MCAs voting 'no.'

The planned purchase is also under probe by the EACC following complaints raised by residents and leaders.

The committee recommended the county should construct an office block for its space needs and said the town has many available parcels.

“We have noted what the Senate has said about the plan but we are  waiting for the advisory from the EACC before we decide on the way forward,” Mandago said in Eldoret. He was launching a bursary for needy students.

He said depending on the EACC advisory,  the Sh570 million may be diverted to other uses in a supplementary budget to be discussed with the assembly soon.

The county had earmarked the NBK building for purchase to provide office space for executive staff.

But the Senate committee that toured Eldoret said the building is dilapidated, uninhabitable and neglected. Senators said the cost of renovations would be more than the cost of constructing a new office block.

“The county should stop any process initiated on the transactions meant to acquire the building and construct an office block in one of the parcels under its ownership,” the Senate report reads.

The committee said in addition to the Sh570 million purchase price the county will spend another Sh100 million on re configuring the building.

The committee said the cost of building an office block should not exceed  Sh500 million.

Though the transaction started in 2015, the county has yet to make any payment for the purchase,

The sale agreement provides the Sh570 million was to be paid in two installments of Sh300 million and Sh270 million.

Residents opposed the move and petitioned the Senate through Senator Margaret Kamar, saying the purchase was not conducted in a fair, equitable, transparent and competitive manner.

Mandago’s administration emphasised they carried out due diligence in October 2018 and valued the building at Sh568 million. He said the negotiating team settled on Sh570 million  without clear reasons for the increase in the price.

Residents, in their petition to the Senate, said the building is in bad shape and there's no good reason why an office block should be built on other property.
They said the county needs 9,419 square metres but the bank building only co vers 4,560 square metres.

Part of the deal was that NBK would lease back about 2,200 square metres from the same building once it changed hands.

In justifying the purchase, Mandago had said departments and offices are housed in different locations in Eldoret town and this hampers services. Consolidation in one central place is needed, he said.

He said the Controller of Budget had recommended the county stop continuous payment of rents for different offices.