• During the vote, 23 MCAs rejected the Bill, while 13 supported.

• Baringo is the only other county to have rejected the Bill. During the vote, 23 MCAs rejected the Bill, while 13 supported.

Baringo is the only other county to have rejected the Bill. 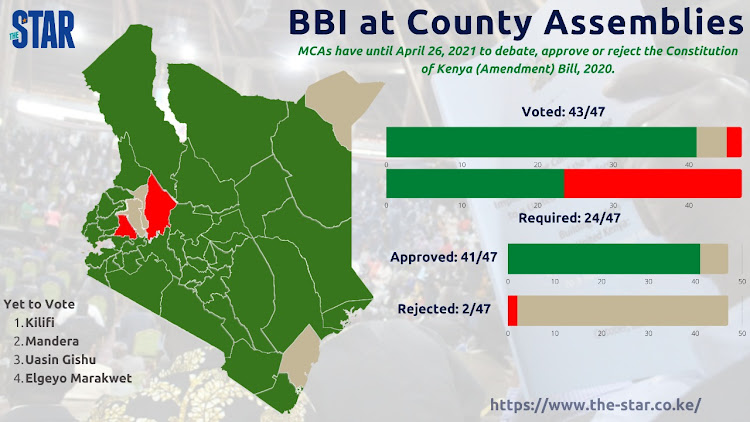 More than 40 counties have passed the Bill.

By Thursday, 41 of 47 county assemblies had passed the Bill, meaning it proceeds to Parliament where the two Houses are expected to endorse it within three weeks. Whatever Parliament says, the Bill will require a referendum.

According to the Constitution, the role of Parliament is a formality and Kenyans will make the final decision.

Their main role is to receive draft bills and their approval certificates from speakers of county assemblies and expedite the process of BBI consideration.

“In Parliament, we have already started the process; there is already a technical team  [that is] receiving certificates from the counties and immediately we have 24 (certificates) verified, the process in Parliament will kick in,” Kimunya said.