Since the death of Moi, there has been a struggle between the two over who will lead the community

• A section of elders had last year crowned Ruto, named him the Kalenjin spokesman and gave him blessings to vie for the presidency.

• On Friday, Gideon was also crowned the Kalenjin kingpin by another faction of Talai elders. 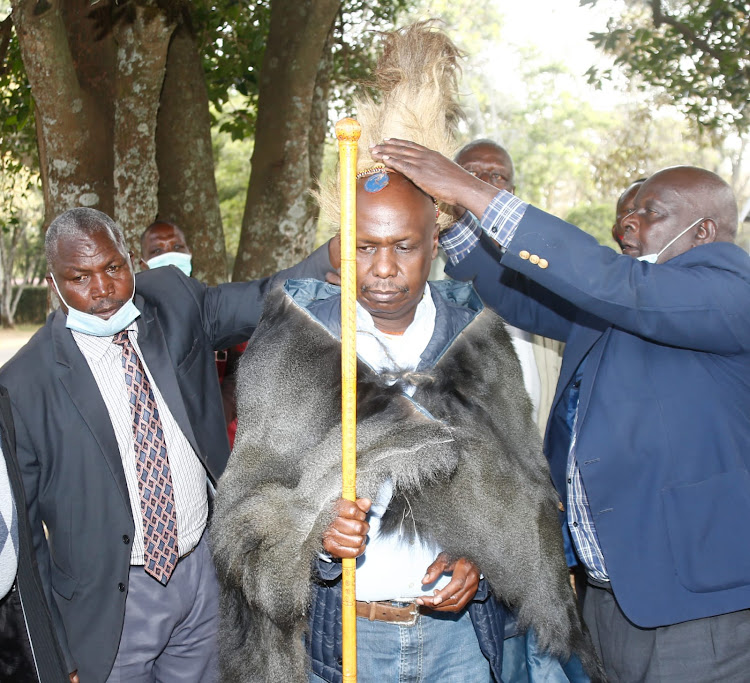 Baringo Senator Gideon Moi is crowned by Talai by elders on January 22
Image: BY MATHEWS NDANYI

The coronation of Baringo Senator Gideon Moi as a Kalenjin elder has set the stage for a new political battle between him and Deputy President William Ruto.

The two are fighting over control of Rift Valley votes ahead of the 2022 polls.

The move has also split the Talai clan elders in Nandi county.

A section of elders had last year crowned Ruto, named him the Kalenjin spokesman and gave him blessings to vie for the presidency.

On Friday, Gideon was also crowned the Kalenjin kingpin by another faction of Talai elders.

Talai elders have the power to name and bless community leaders during ceremonies where the ones being installed are given traditional instruments of power.

Since the death of former President Moi, there has been a struggle between Gideon and Ruto over the community leadership, hence the rush and need for the blessings from Talai elders.

Talai elders who blessed Gideon were led by Mzee Christopher Koyogi while the ones who blessed DP Ruto were led by Reverend Canon (Rtd) James Baasi. Both are claiming leadership of the clan found in Kapsisiywa in Nandi county.

“We officially blessed and coronated Gideon as a Kalenjin elder. We have given him the necessary instruments of power so that he can be like his father and lead the community. We have blessed him to go for the country’s leadership,”  Koyogi said.

Gideon was blessed at his Kabarak home and not in Nandi, but Koyogi defended the move, saying it was their decision to carry out the function at a place of their choice.

Reverend Baasi and his group have dismissed the coronation of Gideon as fake, saying leaders are supposed to go to the 'shrine' in Kapsisiywa and not the elders going out to look for the leaders.

Earlier this month, rowdy youth blocked Gideon from accessing Koyogi’s Kapsisiywa home for the coronation. They argued that Ruto had already been blessed by the community and no one could undergo the same.

There has been disquiet among allies of the DP following the coronation of Gideon.

Kanu leaders in the region, led by Keiyo branch chairman Paul Kibet, said Moi’s instruments of power were still with his family and the elders had given Gideon the necessary powers to take over.

“Gideon is now a properly installed Kalenjin community leader and no one can dispute that,” Kibet said.

Gideon has stepped up his visibility in the region with a series of events. The DP is also making efforts to lock the region ahead of the 2022 polls. Both want to vie for the presidency.

A week ago, Ruto gained politically when he was joined by former Bomet Governor Isaac Rutto. The former governor, who leads CCM party, had earlier been in Gideon’s camp.

“I have decided to support you because I believe in the policies you are propagating to empower the poor, same as what CCM has been fighting for,” the former county chief said.

The majority of the elected political leaders in the region are allied to Ruto, but Gideon also enjoys support from key leaders including Elgeyo Marakwet Governor Alex Tolgos and Moiben MP Silas Tiren, among others.

Gideon is currently hosting more political meetings in the region than ever before. It is expected that his battle with DP Ruto will heat up as the clock ticks towards next year’s polls.