• They accuse former directors of swindling the organisation and then teaming up with top Moi University managers to buy assets of the sacco.

• Three weeks ago, the High Court ordered for the sale of the 14-storey Musco Towers in Eldoret which is owned by the sacco. 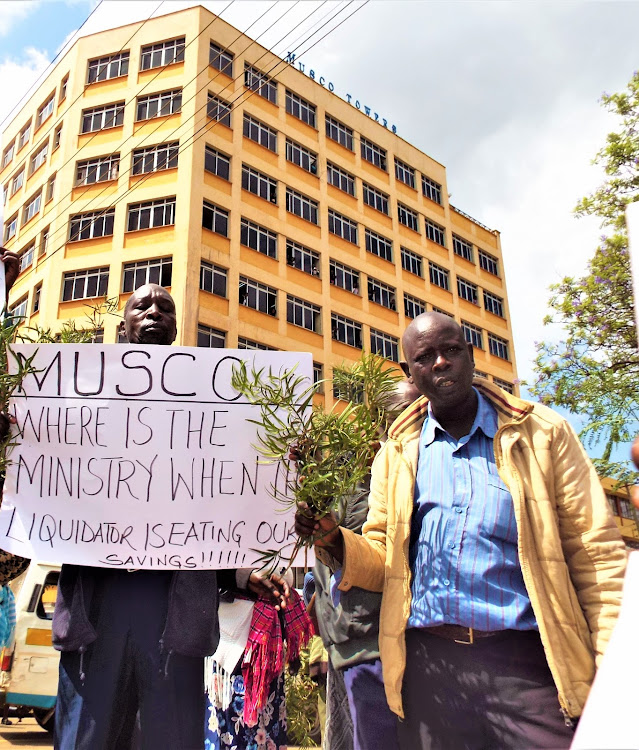 Members of the Moi University Savings and Credit Cooperative Society could lose Sh4 billion in savings after a court ordered an auction of its assets to pay debts.

The more than 3,500 members who are the staff of Moi University, University of Eldoret and Moi Referral Hospital have asked the DCI and the EACC to probe alleged graft in the sacco.

They accuse former directors of swindling the organisation and then teaming up with top Moi University managers to buy assets of the sacco.

Three weeks ago, the High Court ordered for the sale of the 14-storey Musco Towers in Eldoret which is owned by the sacco.

The sale will be to facilitate payment of debts of more than Sh600 million owed to Co-operative Bank and a contractor.

Sacco secretary general Jack Willis now wants the authorities to investigate the former directors of the sacco blamed for its collapse.

“We have tried to reach all our leaders in this region to intervene but they have ignored us. We now appeal to President Kenyatta and his deputy William Ruto to save thousands of members now staring at losing their lifetime savings,” Willis said.

Willis who is also the University Academic Staff Union chapter secretary asked the EACC and the DCI to help the workers get their assets back.

He said the sacco was under liquidators who were colluding with the top managers to sell off the Musco Towers at a throw-away price.

“The liquidators are suspiciously in a hurry to sell our Musco Towers building yet we have asked for talks to find how we can resolve the debt issues,”  Willis said.

He wondered why the liquidators continue to micromanage Musco revenue and openly mismanage the sacco’s resources.

“We believe the large scale misuse of Musco resources is the main reason the liquidators are rushing to the auction process, to cover up for misappropriation of the sacco funds,” Willis added.

The secretary said they will fight to the bitter end to save members who are crying for justice.

Willis said that some of the senior and junior university staff had invested in the sacco and hold shares worth between Sh2 million and Sh20 million.

“Those who are about to retire will lose all their savings and go home empty-handed, yet a few individuals want to enjoy benefits they did not even invest,” he said.

The sacco, which was the largest in Eldoret three decades ago, also drew membership from the Masinde Muliro University of Science and Technology, Maasai Mara and Kabianga universities in Narok and Kericho counties respectively.