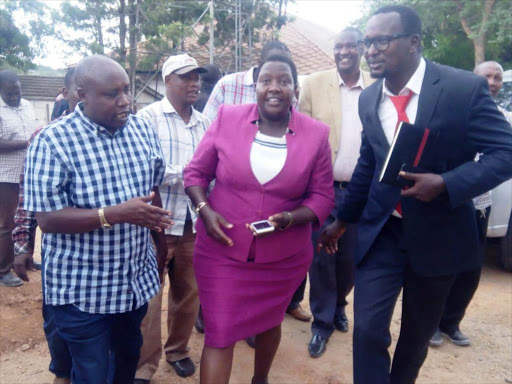 Kajiado East MP Peris Tobiko flanked by her lawyer, Koin Lombo (in black suit( walks to the DCI offices to record a statement over allegations of incitement of people to violence.

An MP accused of inciting her community to violence on Monday recorded a statement with the police.

Kajiado East MP Peris Tobiko (below) presented herself to the DCI in the company of lawyer Koin Lombo. She was questioned for more than three hours.

The lawmaker was sought by the DCI for close to a week over claims she incited retrenched staff of the East African Portland Cement against their former colleagues on January 10.

The DCI said the lawmaker and others allegedly went to the Kibini factory in Sultan Hamud and addressed the former workers with intent to incite them to violence.

DCI officers last Friday sought a court order compelling her to appear before a magistrate on Monday with an anticipatory bail of Sh100,000.

Police said, however, she will present herself to court today.

Tobiko said she will not be intimidated by anyone in her fight for people’s rights.

Post a comment
WATCH: The latest videos from the Star
by KURGAT MARINDANY @Kmarindany
Rift Valley
23 January 2019 - 00:15
Read The E-Paper