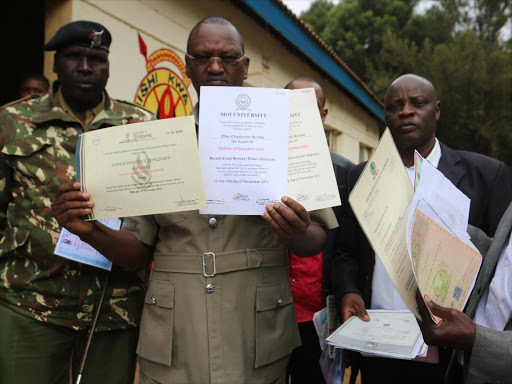 Police in Eldoret have arrested four prime suspects in connection with the printing and sale of fake KCSE exams and degree certificates.

Eldoret South OCPD Wilson Abduba confirmed the arrest during a raid on a building in Langas area.

“These suspects have been involved in this racket for over ten years and they have given us crucial information to help arrest others,” Abduba said.

Police are hunting for more than ten other suspects involved in the racket. Abduba said the suspects were arrested following a tip-off by members of the public and they are being held at Langas police station.

“We will hold the suspects in custody pending completion of investigations by our officers,” he said.

Police say the suspects have been making millions of shillings by selling the fake documents to members of the public.

They have conned many Kenyans for long, Abduba said.

The arrest of the suspects comes in the wake of an audit that was conducted by a regional authority in North Rift where it was discovered that some of its employees had suspicious academic degree certificates.

Fake rubber stamps and seals were also seized by police in the operation.

Police said the probe would be extended to the institutions where workers have been suspected of buying the fake certificates in order to get promotions.

Employees at one of the leading state parastatals based in Eldoret are under investigation.

At least 20 workers at the parastatal in the procurement department are alleged to have used fake academic certificates to get promotions.

During the operation, police also seized computers and other items used to print the fake documents after which they are sold out to a network of racketeers involved in the wide scheme.

In October, the Kenya National Qualifications Authority announced plans to establish an online database with information on all graduates from institutions of higher learning to weed out fake certificate holders.

Post a comment
WATCH: The latest videos from the Star
by MATHEWS NDANYI @ndanyi_mathews
Rift Valley
06 December 2018 - 00:00
Read The E-Paper