Cops drive 2,000 cattle out of private ranches in Laikipia 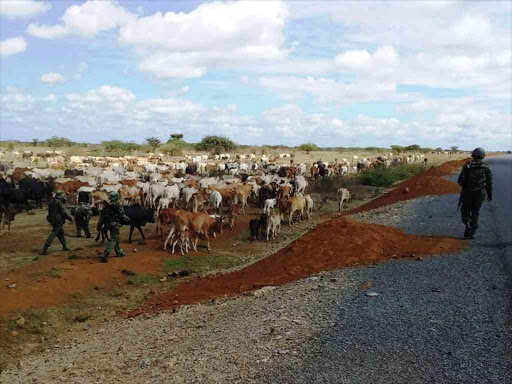 Police officers escort some of the livestock found grazing in private lands in Laikipia West along Rumuruti-Maralal road on Saturday. /ELIUD WAITHAKA

Security officers in Laikipia county have driven out over 2,000 head of cattle from the neighbouring counties that were grazing in private ranches, farms and government lands illegally.

"Some of the cattle flushed out belong to former Samburu Central Member of Parliament Lati Lelelit. As security committee of the county, we will drive all those animals out," Musyoki said.

At the same time, the county commissioner said police officers are pursuing an unknown number of cattle rustlers who stole four heads of cattle and sheep and fled towards Baringo county.

Therustlers shot in the air twice at Matwiku village in Laikipia West subcounty before fleeing with the animals towards Laikipia Nature conservancy and by Monday morning they had not been recovered.

Musyoki warned that invaders will not be allowed to disrupt the peace that has been experienced in the county.