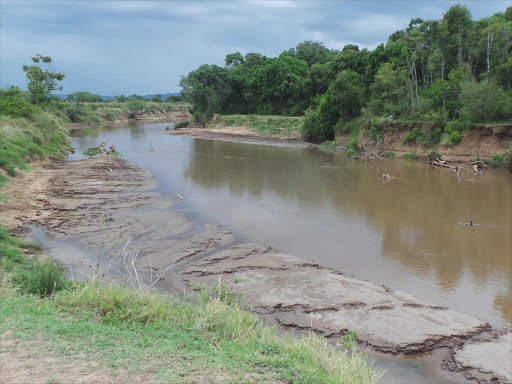 The view of Mara River in the world-famous Maasai Mara Game Reserve that is under threat from human activities./KIPLAGAT KIRUI

The Great Migration next month is one of the natural wonders of the world in which wildebeests, zebra and antelope will pour across the Mara River.

But as precious as the wildlife is the once-mighty Mara is polluted and shrinking. One day it could dry up.

Experts in Kenya and Tanzania through which the river runs say the Mara faces unprecedented threats from pollution, gold mining, encroachment, deforestation and climate change. Its tributaries are drying up

The Mara River is the lifeline of wildlife in the Serengeti National Park in Tanzania and the Masai Mara National Reserve on the Kenyan side. The ecosystem is shared between Kenya and Tanzania, 65 and 35 per cent.

The Mara is a major source of water for Lake Victoria and is essential to forests and farmers in both countries.

The river in Tanzania is critical for farming, fishing, livestock keeping and tourism.

However, the Enapiuapiu Swamp from where River Amalo begins, is threatened by livestock grazing.

River Amalo is one of the main tributaries of the Mara River. The other one is River Nyangores, which starts in Bomet county.

In Tarime district, Tanzania, small-scale gold miners have used river water in extracting the metal. Gold extraction requires mercury, which is poisonous, and is washed into the river.

Kwinya miners cooperative society secretary general Michael Mwita said, “We previously did not know we were polluting the Mara River by allowing water and chemicals we use to return to the river.” Even women are busy exploring.

The Kwinya cooperative society started exploring gold in 2015 behind the hills within Kerende area. Miners use crude and dangerous methods to explore. “Lack of funds has slowed our work, but we are now getting small money from our work,” Mwita said.

Since they work in a hilly area, every time it rains, water washes sand and mercury into the river. This adds the pressure to the once mighty river, posing serious threats.

Mwita declined to say how miners obtain deadly mercury. “We do not know where the mercury comes from but when we need it, we get it,” he said.

The World Wide Fund For Nature is raising awareness about the need to protect the river. It is educating miners about the dangers of releasing contaminated water back to the river.

“We have a very important partnership with WWF, where we engage communities on the importance of the river. We have erected beacons to provide a buffer zone where over 3,000 trees have been planted as part of the effort to protect the river,” Mungo said.

The Kenyan government too has started planting trees to increase the forest cover to 10 per cent by 2022 from the current 7.24 per cent. This also affects the Mara region in Narok

Makamba, representing Vice President Samia Hassan during celebrations at Tarime grounds, said, “Conservation and protection of the Mara River Basin ecosystem is not a joking affair.

“If we don’t sustainably manage this resource, there will be no foreign exchange and agricultural activities will be affected, throwing the country into economic ruin,” Makamba said.

Kenya and Tanzania have signed an agreement proving a framework for joint conservation and sustainable utilisation of the basin’s resources.

Kenya’s Environment PS Charles Sunkuli said, “The Mara River is a resource we must diligently plan and manage sustainably.”

He said Kenya and Tanzania are committed to negotiating equitable access and use of the Mara River.

Post a comment
WATCH: The latest videos from the Star
by GILBERT KOECH IN TARIME DISTRICT TANZANIA
Rift Valley
22 June 2018 - 00:30
Read The E-Paper