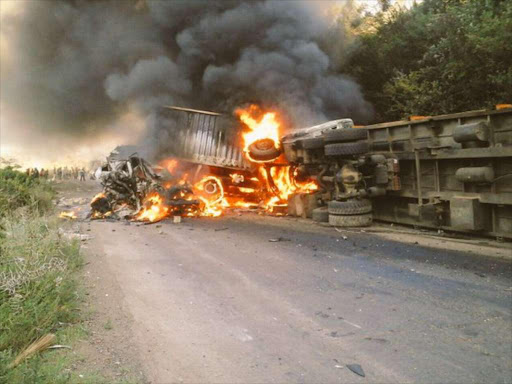 The man was burnt yesterday while the other three nursed serious burns following the early morning incident near Mai Mahiu trading centre.

A trailer ferrying drums of bitumen developed mechanical problems and rammed into a fleet of vehicles.

Some of the vehicles burst into flames, burning passengers, before the trailer went up in smoke.

Six hours after the accident, the trailer was still on fire.

There were fears the burning drums could blow up.

However, residents continued to mill at the scene as police tried to disperse them.

Simon Mwangi was in a lorry ferrying sand.

He narrated how the speeding trailer came downhill, sweeping all vehicles in front of it.

Mwangi, who sustained head injuries, said six trucks, including one ferrying flowers, were hit by the trailer before crashing into a car with four occupants.

“The trailer and the personal car burst into flame. Things were worsened by the bitumen, which also caught fire, seriously burning the passengers,” he said.

One of those involved in the rescue, Erick Kamau, said they saved passengers from the trucks before they caught fire.

He narrated how they watched from a distance as the fire burnt one person to death.

Kamau said they could do little as the fire was too intense.

“Those burnt were from the personal car, while the fate of the driver and conductor of the trailer are unknown as the vehicle is still on fire,” he said.

She termed their condition serious, saying they suffered more than 70 per cent burns.

The victims were transferred to Kenyatta National Hospital for specialised treatment.

Kioko said they were waiting for firefighters to extinguish the fire at the trailer as there were fears some people were inside.

The police boss said they are still looking for the trailer’s driver.

“Currently we are involved in extinguishing the burning trailer and clearing the road so that traffic can flow,” he said.