Wildebeests return to the Mara in rare event 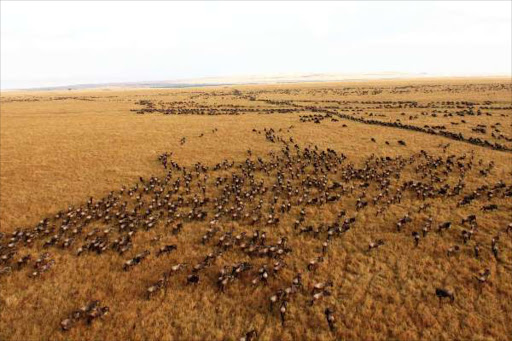 A bird’s eye view of the world-famous wildebeest migration as seen from a hot-air balloon.

THOUSANDS of wildebeests that moved to Serengeti National Park in Tanzania in September have returned to the Maasai Mara Game Reserve. According to environmentalists, the unusual occurrence has been necessitated by the drought currently ravaging parts of Serengeti plains.

Speaking to the Star yesterday, the Mara-Serengeti Ecosystem co-ordinator for Lake Victoria Basin, Nicholas Murero, said lack of pasture due to drought has forced the wildebeests to come back to the Mara ecosystem.

“They exhausted everything in Serengeti plains and returned to the Mara where there are enough pastures that regenerated after tourism peak seasons that started in July,” he said. Murero exuded confidence that the abnormal occurrence will boost tourism in the county.

“This implies that the tourists who did not witness the spectacular wildebeests migration between July and October have another chance to catch a glimpse when they are crossing Mara River to Maasai Mara. This will increase the tourists arrivals as we head to Christmas festivities and New Year celebrations,” he said.

The peak season in Masai Mara starts when the migration of hundreds of wildebeests cross from Serengeti National Park in Tanzania to Kenya in July.

Post a comment
WATCH: The latest videos from the Star
by KIPLANGAT KIRUI
Rift Valley
27 November 2013 - 00:00
Read The E-Paper