At least eight candidates have submitted their papers for the position 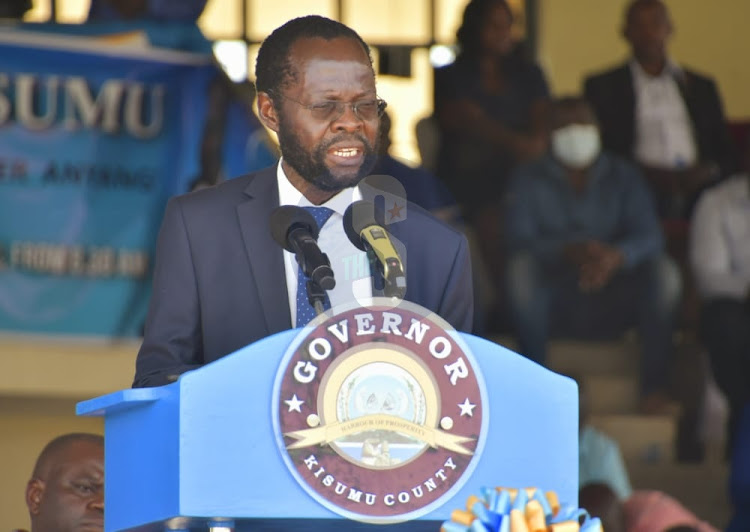 Kisumu Governor Anyang Nyong'o after being sworn in at Jomo Kenyatta International Stadium in Mamboleo, Kisumu on August 25, 2022.
Image: FILE

Kisumu speaker Elisha Oraro has gotten the upper hand in the race for the county assembly top seat after he received the backing of the dominant ODM party to retain the job.

At least eight candidates have submitted their papers for the position.

Oraro already expressed confidence of winning the seat, citing the major boost after the ODM party approved his nomination.

This was done through a letter by the party secretary general Edwin Sifuna.

While speaking to the press at the assembly precincts, Ong'ou also exuded confidence of a win. He asked the MCAs to conduct a free and fair election next week.

He noted that he has the numbers to give him a win next week as he promised to guide the Assembly to greater heights.

"Let's embrace peace within the county, let the campaigns not bring divisions because we still have a county to keep. We need a one united Kisumu county," he added.

Central Nyakach ward MCA Vincent Obuya who accompanied him after picking papers for the Deputy Speaker said they are ready to conquer.

Obuya said they will be meeting Raila Odinga on Saturday to hear what he is going to say to the members.

He said they have 29 MCAs supporting the candidature of Ongou against 47 MCAs noting that they are destined for a win.

"This is our win and we are very confident," he said.

Kisumu county assembly has witnessed chaos in the past following impeachments of two former Speakers.

First to be impeached was Ann Adul followed by Onyango Oloo.

Raila is expected to meet the 47 MCAs on Monday for  dinner, a move viewed as a chance to whip the members to vote for Oraro.

He will battle it out with former speaker Elisha Oraro and lawyer Sam Onyango on Thursday.
Counties
2 weeks ago

He will battle it out with former speaker Elisha Oraro and lawyer Sam Onyango on Thursday.
Counties
2 weeks ago
Post a comment
WATCH: The latest videos from the Star
by FAITH MATETE
Nyanza
18 September 2022 - 22:00
Read The E-Paper