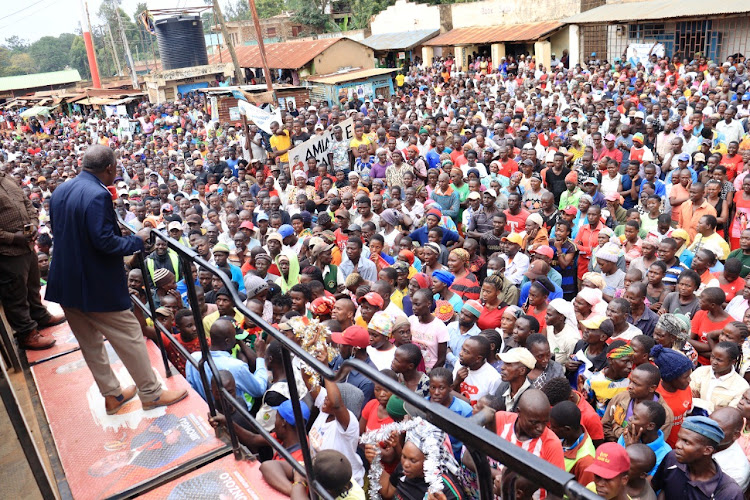 During campaigns, Jirongo said he was only campaigning for Raila because he was not from the Kikuyu or Kalenjin communities that have ruled the country before, but not because he (Raila) is a saint.

Jirongo, who is vying for the Kakamega governor seat, also protested further delay of the governor election in the county which was postponed again the Independent Electoral and Boundaries Commission.

The UDP leader said he read mischief in the postponement of elections in Kakamega and Mombasa counties, saying the government was delaying the polls to install a friendly governor who will facilitate crippling of the economy of the county.

“The reasons being advanced by the Independent Electoral and Boundaries Commission for the delay of the elections was flimsy and doesn’t make sense at all. They’re playing games,” he said.

The former Lugari MP said that the commission has staff spread across the country and should swap its polls officials from other areas to allow the elections to go on next Tuesday.

“Even if they were being harassed as claimed by the commission chairman Wafula Chebukati, it cannot be all of them. We know that the government is behind this. They want to install a governor who will facilitate the sale of Mumias Sugar Company,” he said.

The electoral agency on Wednesday postponed the Kakamega and Mombasa governor election for a second time indefinitely.

The commission suspended governor elections in the two counties on August 8 following a ballot mix-up. The agency had slated the two polls for August 23, but called them off indefinitely.

Chebukati said the commission staff who participated in the August 9 general election have been harassed and some arrested arbitrarily and fear reporting on duty.

My bid is to prepare Luhyas for national leadership, says Jirongo

Luhyas failed to succeed Kibaki because of disunity— Jirongo