Nyong'o will face former governor Jack Ranguma of MDG party who seeks to recapture the seat.

•Nyong’o in his manifesto ‘dubbed building the future on the foundation we have laid’ pledged to revitalise agriculture for food security and agribusiness.

•He will revamp rice production, processing and marketing if elected for a second term. 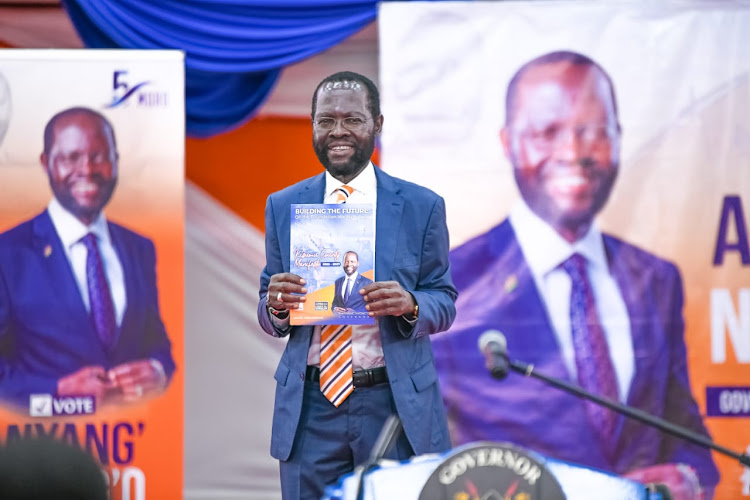 Kisumu governor Anyang Nyong’o during the launch of his manifesto at Citam Church on Thursday.
Image: MAURICE ALAL

Kisumu governor Anyang Nyong’o has launched a manifesto with agriculture and health and sanitation top on his development agenda as he seeks re-election.

Nyong’o in his manifesto ‘dubbed building the future on the foundation we have laid’ pledged to revitalise agriculture for food security and agribusiness.

Nyong'o will face former governor Jack Ranguma of MDG party who seeks to recapture the seat.

While launching his manifesto at Citam Church on Thursday, Nyong’o said he will revamp rice production, processing and marketing if elected for a second term.

He said his administration will focus on building the future by consolidating the gains made and initiating new programs and projects.

“My government will install a rice mill with the capacity to mill, grade and package rice in Ahero, Nyando sub-county,” he said.

He promised to also invest in horticulture and floriculture in Nyamthoe, Mboha Valley and Kano plains.

He also committed to enhancing the capacity of the Agricultural Call Centre to support the farmers with the right information on the right farming science.

Nyong’o said he will finalise the partnership with United Greens (UK) for production and value-addition in the cotton and rice value-chains in a mega project.

Already, he said they have agreed upon and signed between the county government of Kisumu and United Greens.

Nyong’o will also accelerate the growth of the dairy industry by operationalising the Sh 132 million Kisumu dairy development centre (KDDC) at Nyangore in the Muhoroni sub-county.

He looks towards the importation of 488 quality high yielding animals and enhanced artificial insemination. 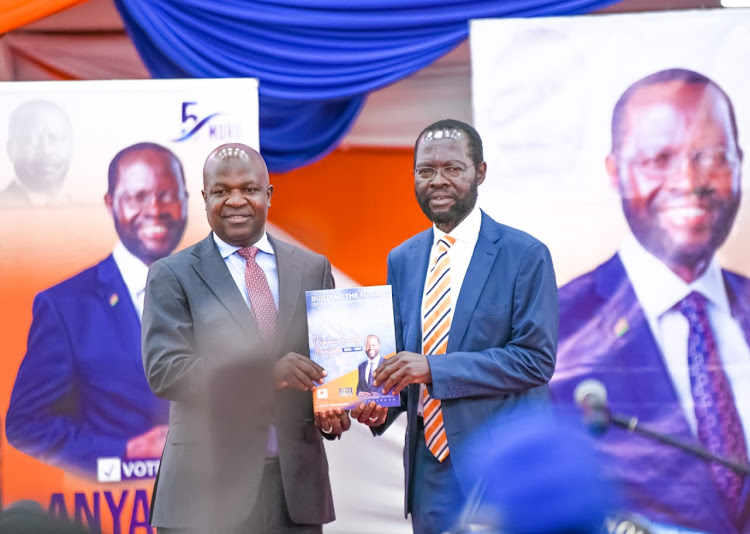 Kisumu governor Anyang Nyong’o with deputy governor Mathews Owili during the launch of his manifesto at Citam church on Thursday.
Image: MAURICE ALAL

This, he said, will be in addition to the three tonnes fish cooling facility at Jubilee fish market for fish aggregation and storage.

Apart from fish, he said they will support the growth of 150 women and youth groups that have been provided with grants worth Sh 75 million and entrepreneurial skills to boost the annual chicken production.

Nyong’o outlined his achievements in the first term on health, roads, agriculture and education, especially ECD amongst others which he said speaks volumes.

On health, he assured residents that they will ensure a healthy population living in a clean environment.

Nyong’o noted that he will optimise community health services by introducing performance-based incentives to community health workers and establishing programmes to address rising cases of non-communicable diseases in the county.

“My administration will strengthen primary healthcare by establishing primary care networks and creating multidisciplinary family health teams in all sub-counties following the successful pilot in Nyando sub-county,” he said.

He will further decentralise medical services by improving seven sub-county hospitals to receive referrals from lower-level facilities as well as increase health insurance coverage for the population in Kisumu to above 70 per cent.

Nyong’o targets to regularise all the outstanding human resource gaps including confirmation of contracted health workers, adding that no county health worker will be engaged on a term contract of less than three years.

He also wants to increase access to adequate and equitable sanitation and hygiene in households, increasing households with improved latrines from the current 25 per cent to 70 per cent.

Nyong’o promised to complete Kisumu Comprehensive Cancer Centre at JOOTRH and finalise autonomisation of JOOTRH to a semi-autonomous level 6 hospital.

He said he will upgrade Kisumu county's referral hospital to a modern level 5 hospital.

“We will use the machine-based Road construction program to improve the infrastructure across the county. Want to improve the 10km Kadinda – Soko road in Nyakach using the Claycrete roads technology,” Nyong’o said.

He has earmarked to improve Rabuor – Nyande road in Nyando Sub-county using the claycrete technology and Ahero Ombaka road in Nyando to bitumen standards.

To restore sanity and order in the transport sector, he plans to digitally register all the bodaboda operators within the county.

Nyong’o also pledged to invest in water, environment and education by promoting skills development and innovation.

Oron enjoys the support of governor Nyong'o who is also defending his seat.
Counties
4 months ago