Wanga assured Karua that they are going to ensure 100 per cent voter turnout.

·She asked residents to avoid saying that they have already won the presidential seat without turning up on elections day and voting for Raila. 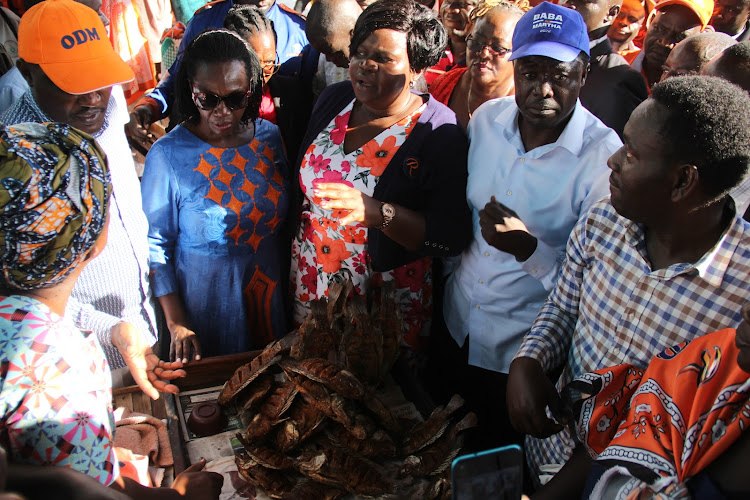 Karua who toured Homa Bay on Wednesday argued that it would not be prudent if residents attend rallies organized by Azimio brigades but fail to vote on August 9.

Nyanza is perceived as Raila’s stronghold.

Karua said Raila may not benefit if Nyanza residents fail to turn out as voters in large numbers.

Speaking when she met Azimio women league conference in Homa Bay town, Karua expressed optimism that the voter population in the region will make a significant component of their basket if all residents vote.

She asked residents to avoid saying that they have already won the presidential seat saying they should prepare to vote.

“Let the people of Nyanza not let us down at the eleventh hour by failing to vote. Please ensure you cast your votes to make Raila win the presidency seat,” Karua said.

Karua argued that Raila and her are the best candidates for the presidency of the country because of the important contributions they had made to reforms and democratization.

“Raila has fought for many reforms including the county governments we have today. Many major roads were constructed when Raila was in government hence he deserves being president,” she added.

Wanga assured Karua that they are going to undertake campaigns to ensure 100 per cent voter turnout.

“We want to work together and deliver 100 percent of votes. Homa Bay is an ODM zone hence we’ll ensure everybody casts their vote,” Wanga said.

Karua told Kenyans to avoid propaganda that the Azimio One Kenya coalition is part of the ruling government.

She said Raila and she should be considered as fresh blood that needs the mandate of the people to rule the country.

“Let people stop confusing us that we are part of the Jubilee government. Jubilee is just one of the 26 political parties forming the Azimio la Umoja One Kenya Coalition. Let nobody lie that we are in the government,” Karua said.

Mbadi challenged the Kenya Kwanza coalition headed by Deputy President William Ruto to tell Kenyans what they have done to Kenyans before being voted for leadership of the country.

He argued that Ruto had nothing to show Kenyans despite being the deputy president.

“Let Ruto not lie to us that he is not in the government. He should bear the blame for anything he feels the Jubilee government has failed to do,” Mbadi said.

In local politics, Karua drummed up support for Wanga who is eyeing the Homa Bay gubernatorial seat on the ODM ticket.

She argued that Wanga is making history of being a female gubernatorial candidate in Nyanza with a ticket of a robust political party.

“Nyanza region is in the process of making history of having a governor. Let us support Wanga to make the dream come true,” Karua said.

Raila, Karua were leaving the IEBC meeting when the DP was arriving.
News
5 months ago