Ranguma is seeking to unseat the incumbent governor Anyang Nyong'o.

•He will run for the seat on a Movement for Democracy and Growth (MDG) party ticket.

•Ranguma is seeking to unseat the incumbent governor Anyang Nyong'o 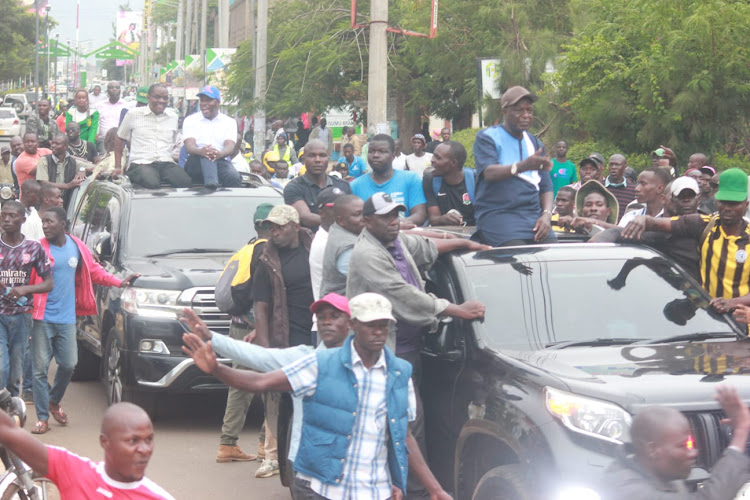 Former Kisumu Governor Jack Ranguma storms the streets of Kisumu while in the company of his supporters during the launch of his campaigns and running mate.
Image: MAURICE ALAL

Former Kisumu Governor Jack Ranguma has picked lawyer Tom Ndalo as his running mate in a bid to recapture the governor seat in August 9 polls.

He will run for the seat on a Movement for Democracy and Growth (MDG) party ticket.

Ranguma is seeking to unseat the incumbent governor Anyang Nyong'o.

Ranguma expressed confidence in defeating Nyong'o who will defend his seat on the ODM ticket after the party awarded him a direct ticket.

While drumming up support for his bid, he assured supporters that he will restore Kisumu’s lost glory in matters of development and socio-economic growth.

Former Kisumu Governor Jack Ranguma storms the streets of Kisumu while in the company of his supporters during the launch of his campaigns and running mate.
Image: MAURICE ALAL

The group had a series of rallies which started in Muhoroni through Nyando, Kondele, Kibuye and Kisumu’s CBD.

The leaders backed Ranguma and Ndalo for the seat saying their team was united and prepared to deliver victory.

Initially, the leaders were supporting Obura to face Nyong'o for the ODM ticket in primaries but the party opted to award the governor a direct ticket.

Ranguma faulted Nyong’o for ruining the development gains his administration made during his first term. 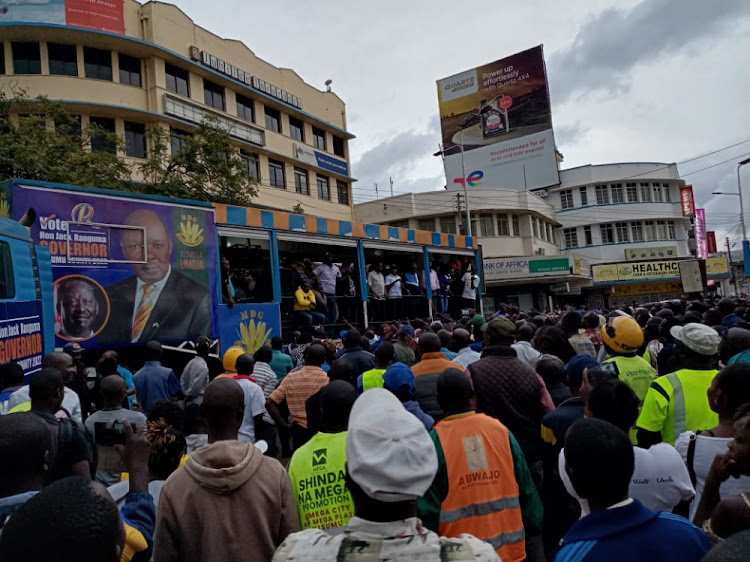 He pledged that when elected, he will initiate projects which will improve the livelihood of county residents.

He lauded Ndalo saying apart from being a lawyer he was also an economist whose experience will help spur the county's economic development.

"We plan to revive the destroyed economic activities of ordinary residents which was the key backbone of Kisumu," Ranguma added.

On the Kibuye market, he criticised Nyong'o for ruining the good plan which was drawn under his administration saying whatever has been constructed was totally far from the design.

He told off Nyong'o to stop taking credit for donor-funded projects and tell the public about the projects he has implemented using funds from the national treasury.

"We want to see the projects which his government has funded with billions of shillings allocated to the county. They are unable to spend 30 per cent of the allocation of the funds on developments as required," Ranguma said. 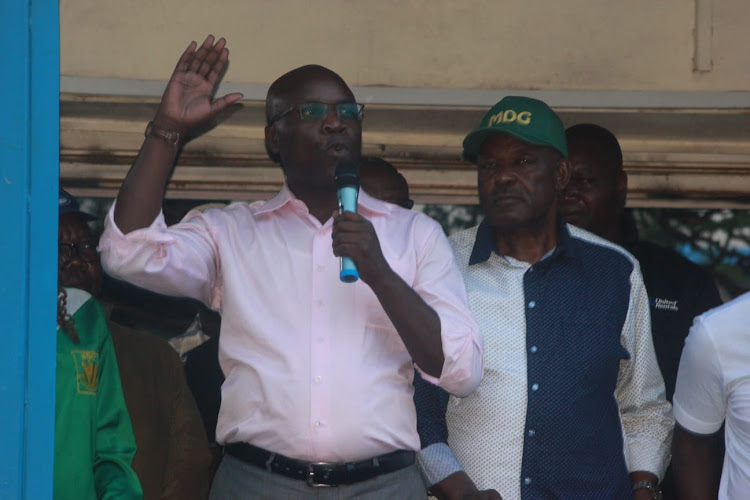 This, he said, has derailed the county's development growth pledging that his administration will reverse such when elected.

Outa blamed Nyong'o for destroying the livelihoods of thousands of small traders which was generating huge revenue for the county government through the demolition of their structures without giving them prior alternative spaces.

He exuded confidence that their alliance will send Nyong’o home and form a transformative and inclusive government.

"The only vote which is guaranteed is that for Raila. The rest voters will elect the leaders they want. Every other aspirant should face the electorates," Outa said.

The senator who was once a close political friend of Nyong’o said voters should exercise their democratic right of electing leaders based on their ideologies and development track record.

On his part, Obura said they will rally their supporters to ensure Ranguma wins the county's top seat.

He said they have what it takes to deliver the victory.

"We will make sure Nyong’o goes to his home in Ratta, Seme sub-county and let us make the county more vibrant and developed," he added.

He also criticised the administration of Nyong'o for blocking aspirants to access the City's CBD to popularise their bid saying such was uncalled for.

Oloo echoed the sentiments saying they look forward to forming a government that will effectively address the health, agriculture and trade among others for the betterment of residents' lives in the seven sub-counties.