The governor urges residents not to elect those who were handed direct tickets. 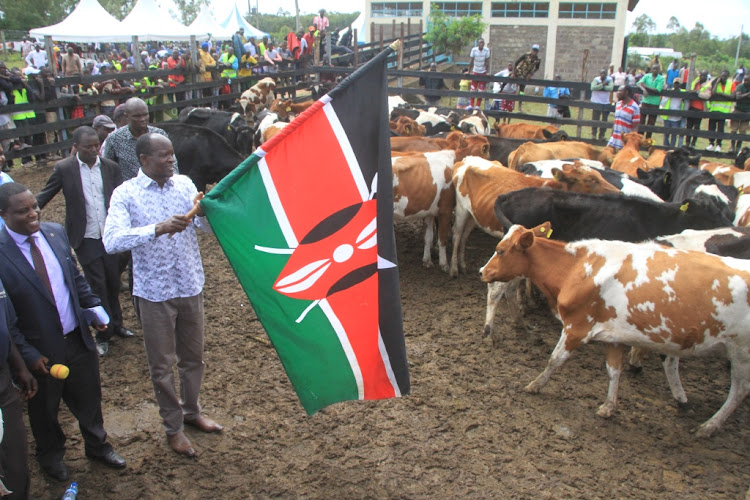 Obado, in a fresh onslaught against Raila and the Orange party which sponsored him in his second term, said Ruto’s presidential bid was blessed by Kenyans "which is the voice of God".

“On the ground, we want Ruto as president. It is the people who have spoken so I don’t want my rivals to come with big shoes and step on me. I am only saying what Migori county and people want,” Obado said.

Obado said there were been rumours that votes meant for Ruto and other aspirants “will be stolen from Tanzania where voters will be shipped from." He said he would not allow that.

“I want to assure you that through your support, we will have a hustler as a president. We know his development record and, as Migori people, we are safe under his regime,” Obado said.

He spoke at Karamu grounds in Kuria West constituency on Monday when he flagged off 189 dairy cows to farming groups in 40 wards.

Obado took a swipe at Raila and ODM over the shambolic nominations, where aspirants were awarded tickets in Nairobi.

“Those candidates who were awarded certificates by ODM are lucky because they have what they will place under their mattresses as pillows when they will be sleeping after voting,” Obado said.

He further said he was convinced that “90 per cent of the aspirants will be elected as independent candidates. Avoid those inept people being imposed on you by the party and elect able leaders who will address your problems.”

His wife, Hellen, has declared interest for the Woman Representative seat on an independent ticket.

Obado, who was directly attacking ODM aspirant for governor seat Ochillo Ayacko, said John Pesa, who is vying for the same seat on the DAP-K ticket, will win.

“I will ensure that I leave the county in safe hands. I don’t want to hand over power to those who will give you people a hard time. John Pesa stands a better chance of running this county to greater heights,” he said.

According to Obado, his legacy projects were only “in safe hands” if someone who had worked closely with his administration and was keen on spearheading his development agenda is elected.

He said outsiders from his administration risked bungling the projects he has spearheaded for Migori residents.

The governor urged the residents not to elect those who were handed direct tickets.

Obado has had frosty relations with ODM after he decamped to PDP with Orange party top brass accusing him of betrayal.

Hellen said she will vie on an Independent ticket.
Counties
3 weeks ago

Helen's declaration means that three of Obado close family allies Lillian Akugo and Zilpa Audline will battle for the seat
Counties
3 weeks ago
by MANUEL ODENY
Nyanza
10 May 2022 - 22:00