The decision has been criticised by other women rep aspirants

•Woman aspirant Donya Toto Said she got communication through a  phone call. 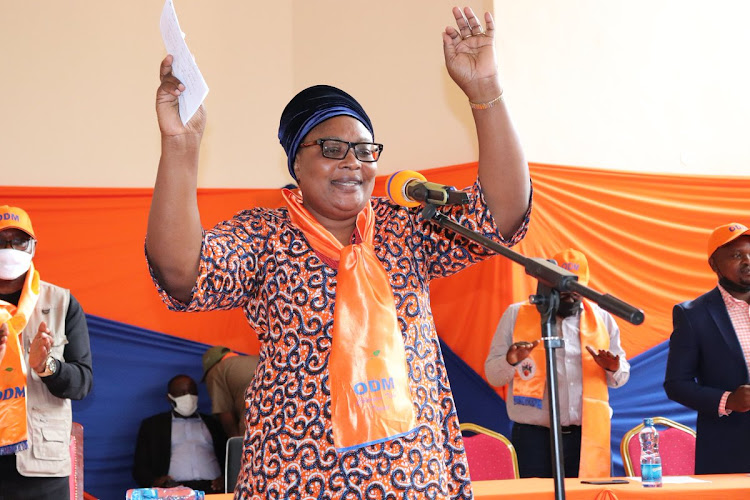 The decision by ODM to hand over a direct ticket to Kisii Woman Rep Janet Ongera has been criticised by other aspirants.

Ongera will be seeking to defend her seat.

National Elections Board chairperson Catherine Mummo urged women aspirants to respect the decision to hand over the direct ticket to Ongera, a party stalwart.

Woman aspirant Donya Toto said she got communication through a  phone call.

“She called me and said the decision to give Ongera the ticket stands although she was position four in the popular opinion poll,” Donya said.

She is among four other aspirants who had paid for nominations.

Donya however said she will still be on the ballot.

She assured her supporters to remain calm and not get dampened by the decision.

“Some factors were beyond us,” she told journalists on the sidelines of ODM aspirants' meeting at a hotel in Kisii on Tuesday.

The meeting was headed by governor hopeful Simba Arati.

Arati said there would be no primaries in about 10 wards.

“In some regions, other aspirants had been prevailed to step down over low scores in opinion polls,” he said.

“As a party, the primaries would determine who will carry the flag.”

The governor aspirants said there would be nominations in areas where the aspirants denounced the outcome of opinion polls.

He, however, said there would be no primaries for the governor and senator seats due to a lack of competition for the seat.

However, Arati said nominations will be conducted for MP and ward rep seats in regions where consensus failed.

Only Simba Arati and Richard Onyonka had their papers filed for the seats.

There were more than 103 aspirants interested in the party tickets for both MP, wards and governor seats.

Arati said the party register will be used in the primaries planned for Thursday.

“Everything will be done in an orderly manner and we appeal for calm to all our people,” he told journalists.

He was flanked by Onyonka and running mate Robert Monda.

Nyaribari Masaba Risper Maseme walked out in displeasure as the meeting was underway.

Ongera did not attend the meeting. No reason was given.

ODM's Mumma defends use of opinion polls to choose nominees

However, other aspirants have protested the move saying it discredits the spirit of majority members
Nyanza - Page 29
3 months ago

Protests in Kisii over ODM's decision to issue direct ticket

They said the move by the party sets a bad example.
News
3 months ago
“WATCH: The latest videos from the Star”
by MAGATI OBEBO Correspondent, Kisii
Nyanza
06 April 2022 - 22:00