Some contenders are reluctant to name their deputies, saying they are still shopping for the best 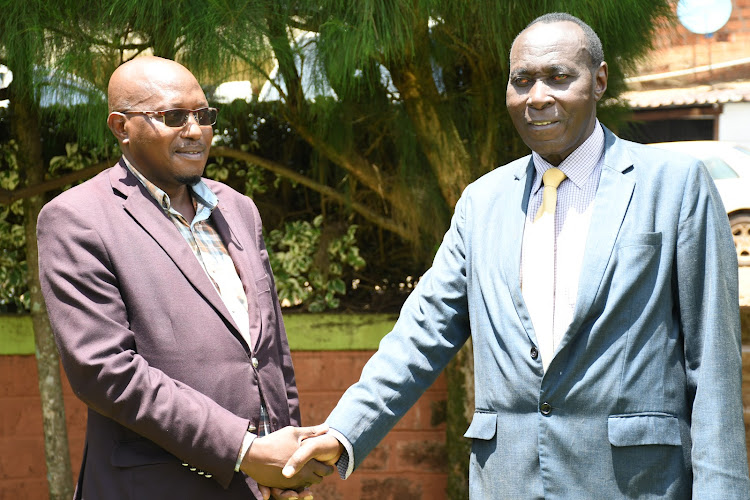 Among those who have reached consensus to be deputised from West Mugirango constituency include Amos Nyaribo, who has picked James Gesami as his running mate.

Others in the race from Bogichora clan are university don Reuben Marwanga of Kanu and James Kemoni of ODM. The two are yet to identify running mates.

Bosire is Raila's pointman in Nyamira and is expected to be handed the ODM ticket after he was ranked the most popular aspirant in party opinion polls.

Some of the aspirants are reluctant to name their running mates, saying there is still time to shop for the best.

Kiangoi served as North Mugirango legislator and assistant minister between 1997-2002.

He made the announcement on Tuesday, during a press conference in Nyamira town.

Kiangoi unsuccessfully contested the senatorial seat in 2017 under the Jubilee party. He unveiled his running mate, Julius Mokogi, an economist from West Mugirango.

He termed the combination as the hope to revive Nyamira's prosperity.

He said they placed their interests aside and joined hands to rescue Nyamira from stagnated development since the inception of devolution.

Mokogi was initially vying for governor before he dropped his bid to join hands with Kiangoi.

“We have come together after deliberations, consultations and found that our agenda for Nyamira is one, We have agreed that I will become governor and Mokogi deputises me to achieve our objectives for the people," Kiangoi said.

Top of their agenda is the youth, who he said have been sidelined by the previous government.

He also said agriculture, being the main economic backbone of the county, has not been utilised to benefit residents.

Kiangoi said their government will ensure priority is given to farmers and offer subsidised services to improve the economy.

“The youth have been neglected and should be given an opportunity to drive the economy," he said.

“We will ensure agriculture is empowered to drive our economy."

Mokogi has held senior managerial positions in top financial institutions in Kenya such as KCB, Cooperative and K-Rep banks.

He also served as the managing director of the Kenya Industrial Estates before venturing into politics.

On health, Kiangoi said residents are not getting the much-needed service.

“If you go to Nyamira hospital today there is no improvement to show that it has changed in terms of service delivery," he said.

The duo will run on an ANC party ticket, an affiliate of DP William Ruto’s Kenya Kwanza Alliance.