He described the Raila movement as a closed club whose interest is to serve select members.

•The MP on Sunday accused Azimio local leaders of sidelining him and trying to block his candidature.

•Machogu described the Azimio la Umoja as a closed club whose interest was to serve select members pretending to be close to Raila Odinga. 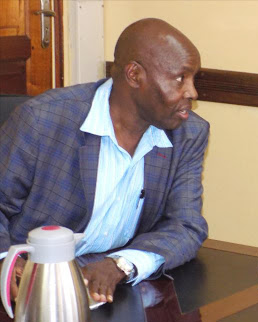 Nyaribari Masaba MP Ezekiel Machogu has decamped to UDA from Azimio la Umoja after falling out with politicians in the movement.

Machogu will vie for the Kisii governor seat on a UDA ticket.

The MP on Sunday accused Azimio local leaders of sidelining him and trying to block his candidature.

“If moving to UDA is all that is needed, so be it,” Machogu told the Star.

The lawmaker will face off with Rachel Otundo, Alfred Akunga and former South Mugirango MP Omingo Magara in the party nominations.

Machogu described the Azimio la Umoja as a closed club whose interest was to serve select members pretending to be close to Raila Odinga.

“If Azimio means well for the country, the leaders must learn to be accommodative to all who mean well for Raila,” Machogu said.

The MP has since picked his team.

He has lately been critical of the government for failing to initiate meaningful development projects Nyaribari.

He criticised two senior government appointees from the region for failing the government in executing its development agenda in the region.

The MP cited the Sh200 million 18 kilometre Getengererie –Ekona-Ramasha – Kiomiti junction road which has since stalled for lack of funds.

The road was launched by Deputy President William Ruto in 2014.

The contractor has moved out of the site.

He accused the same officials of derailing work at Riatirimba Engineering plant.

President Uhuru had directed that Sh100 million be availed to conclude works.

Several years since the order was made, the plant remains a concrete jungle.

The MP has raised concerns about the safety of the Sh1.3 billion equipment lying idle at the facility.

He said failure by the Treasury to allocate the money was rendering the machines obsolete.

“Had these funds been allocated students could be doing vocational courses,” he said.