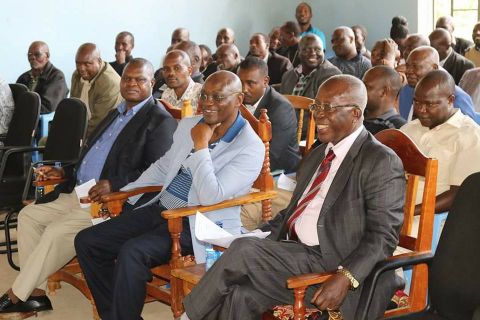 Kisii Senator Sam Ongeri has rubbished claims that he is too old to run for the governor, saying leadership is about experience and not age.

“Every Kenyan has a right to contest for any seat irrespective of age. Those using age to assassinate other characters should stop,” Ongeri told the Star in a phone interview on Wednesday.

Ongeri, 83, said major democracies like America, Israel and Malaysia have been well led by aged leaders, adding that those using age to discredit leaders are misleading people.

He said brain power and experience matters a lot in leadership, adding that delivery of services cannot be politicised.

He urged those who will be contesting for the seat through various parties to preach peace.

Ongeri said as one of the leaders who was among the Koffi Anan led team, he learnt a lot through the efforts of pursuing peace.

“I am urging all those who are eyeing the governor seat from all parties to respect each other. They need to understand that the decision to elect the next governor lies in the hands of our people,” he added.

The senator said he stands a better chance of succeeding Governor James Ongwae, adding that residents need to consider a leader who will continue from Ongwae in terms development projects.

“I want to assure our people that I am determined to complete all projects initiated by Ongwae if I am elected to office,” he said.

Maangi has told Ongeri to withdraw from the race based on his age.

He said it is time for a young leader to take the mantle from Ongwae who is retiring in August.

“I respect Ongeri but I want to tell him to withdraw from the gubernatorial race because of his age. It is time for a young leader to take county leadership,” Maangi said.

The DG has urged his competitors to stop engaging in abusive politics saying the same will not help them garner votes.

Ong’era and Otundo are the only women who will battle out in the male dominated race.

Ongwae who was elected on an ODM ticket for the two terms has not announced who he will support.

Say more should be done to ensure the country does not descend into chaos due to 'loose mouths'
Counties
2 weeks ago
by BENSON NYAGESIBA Correspondent
Nyanza
12 January 2022 - 22:00