Until death: Vow that keeps Kisii woman beside husband bedridden for 31 years 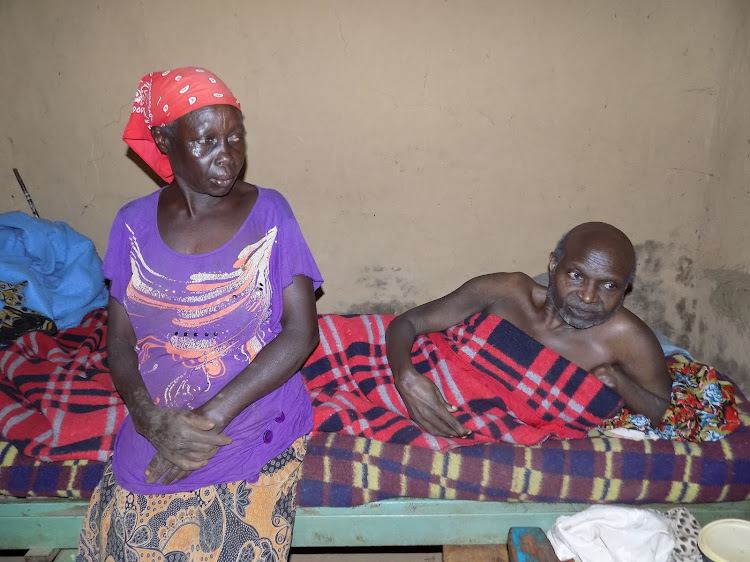 Pauline Kwamboka with her husband Simeon Ratemo at their home.
Image: BENSON NYAGESIBA

Till death do us part is the common vow that couples exchange at the beginning of their union. But is the vow kept?

Well, a woman from Kisii has kept good her vow made in 1978 and has taken care of her husband who has been bedridden for 31 years following a spinal cord injury.

Pauline Kwamboka says she has been doubling up as her husband Simeon Ratemo's caregiver and provider for the family as he has been confined in bed since 1988.

Kwamboka told the Star that life changed after Ratemo, who owned a shop at Nyabiuto in Nyaribari Chache, went to separate two men who were fighting but unfortunately got injured in the process.

She recalls how the October 2, 1988 incident at 4pm changed her family’s life, saying Ratemo was referred to the Russia Hospital in Kisumu where doctors said the injury could not be corrected.

“After several months in hospital, doctors told us he will never recover from the injury and discharged us.”

“I have been leading a miserable life since my husband, who was the sole breadwinner, sustained the spinal injury,” Kwamboka said.

As the years went by, Kwamboka says things went from bad to worse as their two sons were shot by police in separate incidents over being  involved in crime, leaving her to take care of her husband alone.

“Despite the hardships, I have decided to live by the scriptures that only death would separate me and my husband,” the 68-year-old added.

She says due to the nature of her husband's injury, she now has to do menial jobs to get some money to fend for them.

Kwamboka says it has been challenging taking care of Ratemo because he cannot move on his own and has to been helped in everything even when he needs to answer the call of nature.

“Due to the financial constraints, I now do menial jobs for other villagers to at least cater for my ailing husband. I earn less than Sh500 a day. The money is too little to take care of my husband's special needs.”

Kwamboka however says she has learnt a lot about patience and kindness from taking care of  her sick husband whom she takes out to bask after three months.

Her advise to the young generation; be tolerant when married despite the prevailing circumstances.

During the visit to the couple’s home, we found Ratemo listening to a small radio placed next to his bed.

"This radio has been my friend for all the years I have been bedridden. It informs me what is happening in the outside world especially in the field of politics," Ratemo said.

“I live sandwiched between the blankets because I cannot move. I appeal to well wishers to help me get equipment that can help me move around or gain some sort of self reliance because the injury is permanent.”

Ratemo blames himself for the death of his two sons who were gunned down by the police some years back over links to crime.

He says his sons Robert Ondimu and Dennis Machuki would not have been killed were it not for his injury, adding that they were tempted to involve themselves in crime to fend for the family without knowing the consequences.

“The years I have been in bed have been torturous and mentally draining on me but I have not lost hope. I thank my wife for being by my side all this time,” he added.

According to Wolrd Health Organisation every year between 250,000 and 500,000 people globally suffer a spinal cord injury .

The majority of spinal cord injuries are due to preventable causes such as road traffic crashes, falls or violence.

It is the only hospital in the region offering spinal rehabilitation services.
News
1 month ago

Judges reduced the award given to Waihenya from Sh28 million to Sh24.4 million.
News
10 months ago
Quiet battles of hustlers, survivors and slumlords
by BENSON NYAGESIBA Correspondent
Nyanza
11 January 2022 - 23:00