TSC directs teachers to up their games to meet CBC requirements

By April 2022, she said the commission will be training secondary teachers on CBC

•Macharia said with the change in curriculum, the role of the teachers has changed fundamentally because it ought to be guided to the needs of the learners and the curriculum.

•She said teachers are required to use differentiated modes of instruction and assessment for learners to benefit individually and progress meaningfully. 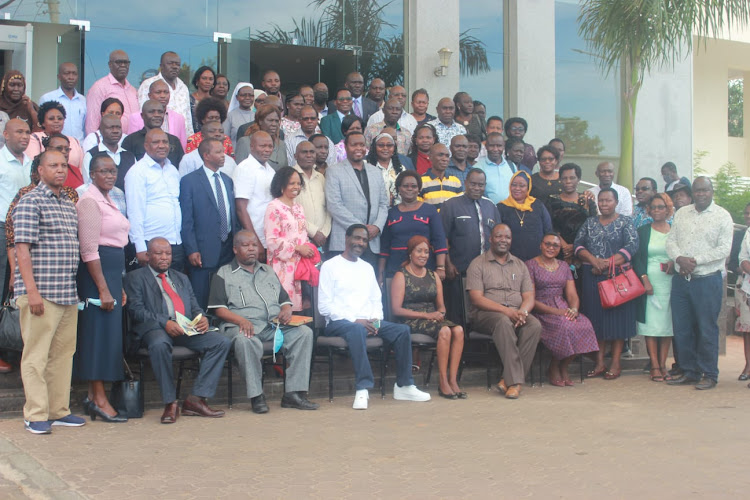 Teachers Service Commission (TSC) has directed teachers to up their game to meet the Competence Based Curriculum (CBC) requirements.

TSC chief executive officer Nancy Macharia said with the change in curriculum, the role of the teachers has changed fundamentally because it ought to be guided to the needs of the learners and the curriculum.

She said teachers are required to use differentiated modes of instruction and assessment for learners to benefit individually and progress meaningfully.

“For teachers to meet the needs of the 21st century learners; they should possess additional skills that include; a learner-centered classroom, students as learners, users, and producers of digital content and project based learning,” Macharia said.

She said these are skills that CBC is demanding of teachers and therefore they must enhance their pedagogical skills and content knowledge.

Macharia noted that TSC has no other teachers saying that the in post teachers must up their game.

By April 2022, she said the commission will be training secondary teachers on CBC. “I urge you to familiarize yourselves with the CBC since the first cohort will join junior secondary in 2023,” she said.

In addition, she said TPD would improve the professional standards of Kenya teachers as well as keeping them abreast with the emerging trends in the education sector.

However, Macharia decried that the executions of these programmes have been faced by litigation thereby delaying their implementation.

“At times one is left to wonder how else the commission would have undertaken its functions, if even when all procedures and legal requirements have been followed, issues end up in courts,” she said.

Macharia said universities and other institutions of higher learning should be equipped with what is required of them based on the CBC.

The move, she said, has been necessitated by the need for such institutions of higher learning to know what is needed of them as they admitted students.

Addressing heads of national secondary schools at a Kisumu Hotel today, Macharia said that CBC requires a lot of innovation from teachers, learners and even parents.

Macharia said CBC is an accepted mode both regionally and internationally. She urged teachers to take the Teacher Professional Development (TPD) seriously since it enhances their professional capacity.

Macharia said that the mode is now the way to go since it improves the capacity of teachers.

She divulged that even the African union embraces the module adding that it is now a requirement there.

The CEO said that teachers must adapt to digital technology in the wake of changing trends.

“That has been demonstrated with the onset of the Covid-19 pandemic where people had to work digitally from home” she said.

Macharia urged teachers to continuously engage learners and parents in order to avoid incidents of unrest.

She lauded the more than 300,000 teachers across the country for the hard work exhibited despite turbulent times.

The CEO assured that teachers who deserve to be promoted will be considered since the body is mindful of their welfare.

“I must say now that the TSC is one of the best employers in this part of the country” she said.

Macharia also advocated for continuous guidance and counseling of students and teachers in schools.

She told the heads to prepare for turbulent times ahead as schools reopen and as the new calendar gets underway especially for the junior secondary school students.