Students given a personal bond of Sh100,000 each, matter will be mentioned on December 16. 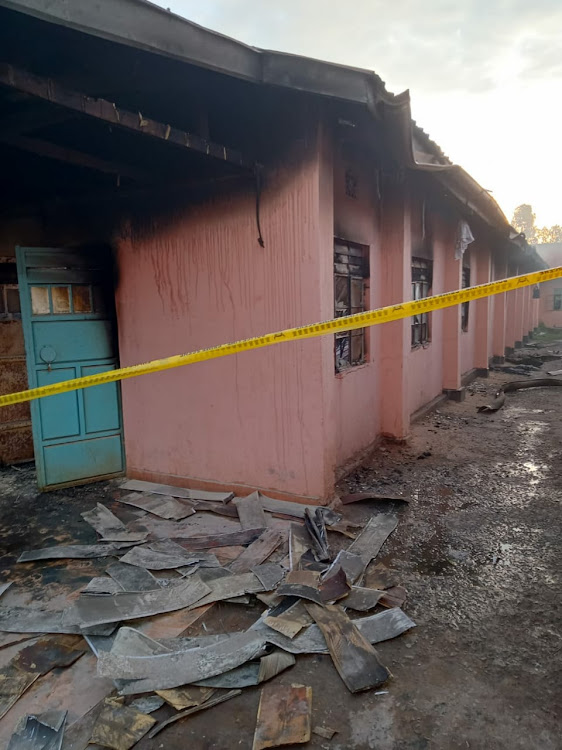 A section of 'Ogango A' dormitory at Maranda school that was razed down by fire on November 7, 2021
Image: DICKENS WASONGA

A court on Wednesday freed four Maranda High School students suspected of burning down a dormitory on December 5.

Bondo resident magistrate Stella Mathenge released the suspects on a personal bond of Sh100,000 each.

Suspects were represented by lawyer Felix Oketch. They did not take a plea because they are yet to be formally charged.

Mathenge ruled that the DCI did not adduce sufficient legal grounds to warrant the continued detention of the suspects.

They were arrested on Sunday last week following the morning fire that razed down the top floor of Boaz Owino hostel.

Detectives had earlier requested the court to grant them 14 days to detain the suspects pending investigations.

However, the magistrate agreed with the accused's lawyer that no valid reason was presented to warrant the detention of the suspects.

The matter will be mentioned on December 16.

The school was closed indefinitely for the second time within a month over fire related incidents.

Siaya county director Nelson Sifuna said the suspects confessed to have been behind the latest arson.

He said according to the confession from the students, the suspects had attempted to burn one of the dorms on the night of December 4.

"They said they used a mattress which they had laid on the ceiling of the building. They tried to lit the fire using the mattresses six times but failed," he said.

According to the director, the students decided to execute their plot again on Sunday morning. "They went back to the dorm during the 10am tea break on the guise of collecting cups."

The 10am fire razed the top floor of the two-storey Boaz Owino hostel used by Form 2s.

Nothing was salvaged from the affected floor, the top education official said, adding that property belonging to 200 students was destroyed.

The school is yet to determine the extent of the damage. "We resolved to send the students home to ease the anxiety and tension among them."

Sifuna claimed the suspects were high on drugs. "They smoked bhang. They said they got motivated to set the building ablaze after taking the drug," he said.

It was not clear how the students got access to the banned substance with the official saying police investigating to establish if the students had contact with someone from outside.

The education official told the Star on phone that the students used a match box they obtained from one of the science labs. He said the police were also trying to find out who could be aiding the arsonists.

"We tried to get information from them on who could be assisting them on these fires but they declined to provide information, we hope police will be able to unearth it," he said.

Maranda, one of the best performing schools in the country, was closed indefinitely on November 8 after a fire razed down Ogango dorm that was accommodating 200 students. 178 students lost their belongings during the November 7 fire.

Following a board meeting on November 11, the school released a schedule detailing how the students were to report back. The first lot reported back on November 22.

All the 2,469 students were required to pay 2,500 towards the reconstruction of the affected building. They were also expected to clear the outstanding fees balance as a condition to be allowed back.

Six suspected arsonists were arrested and arraigned but later released by the Bondo principal Magistrate J.P Nandi after the prosecution said they did not have evidence linking them to the crime.

The magistrate ordered the school to readmit the students immediately. But tension continued building with students issuing threats to burn the school.

The threats were left on toilet walls. The students according to sources from the school did not want to write mock exams.

They were also opposed to changes made in the school menu and the remedial classes which they said begin as early as 4am and end at 11pm when they retire to bed.

These concerns were raised by the students during a baraza with the administration. The school's administration conceded to most of the demands which a board meeting later threw out.

On December 1, the Form 4 students were sent home following another attempt to burn the school.

These actions did not deter the students who remained behind from issuing fresh threats to burn the school even after two police officers were deployed to patrol the school at night.

Post a comment
WATCH: The latest videos from the Star
by DICKENS WASONGA
Nyanza
09 December 2021 - 22:00
Read The E-Paper