Countrywide, many elderly people killed on the pretext of witchcraft to grab their land 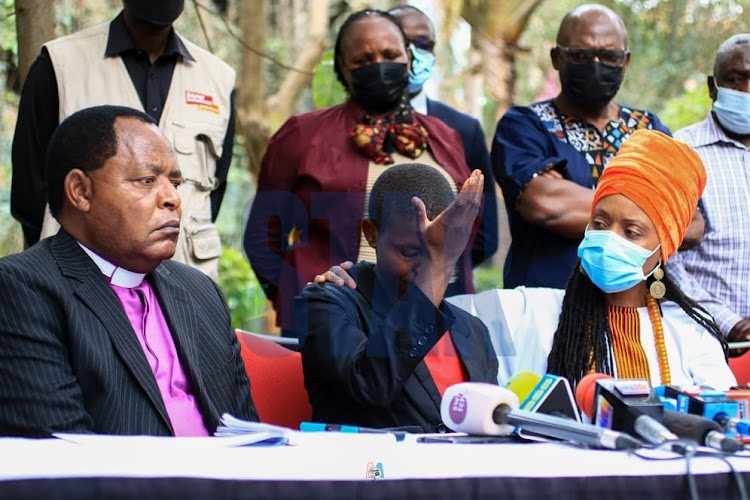 Janet Moraa (C), daughter of the late Jemimah Nyang'ate who is among the victims lynched on allegations of witchcraft, weeps while flanked by Interfaith Religious Council of Kenya Executive Board member Bishop John Warari (L) and Kerubo Abuya (R) at Mayfair Hotel Nairobi on Thursday, October 21, 2021.
Image: WILDRED NYANGARESI

Nyagonyi is a sleepy, almost forgotten village, tucked away in Mbanda area in Kitutu Chache North in Kisii county.

Until the lynching of four elderly women — for alleged witchcraft — on Sunday at dawn last week, the area was obscure.

It's impoverished, dotted with houses of mud and iron sheets with thatched roofs.

Five days later, the village remains on edge. Residents,  especially the frail, old and sick, say they fear for their lives.

“Tension here is palpable, you can slice it with a knife,” resident Thomas Angwenyi said.

Five men have been arrested and four of them arraigned on murder charges. At least 10 accomplices are being hunted, as well as possible suspects.

The reason for the lynching: the alleged bewitching and kidnapping of a secondary school student from his home. He was left unconscious on the path to his house.

It was not the first time he was kidnapped marched through the forest and left speechless, villagers said.

He spoke when villagers spat on him. They believed the saliva of a witch made him speak.

He spoke after two women spat on him; they were immediately lynched.

Resident Agwenyi wants the government to stop the wanton killings of the elderly for alleged witchcraft, which is illegal and punishable by fines and-or imprisonment. Engaging or abetting a witch is also illegal.

Families whose relatives were lynched, some by 'necklacing' with tyres set alight, are also afraid they may be killed for demanding justice and punishment of the killers.

They also reject the  narrative peddled by other villagers that their mothers were witches. 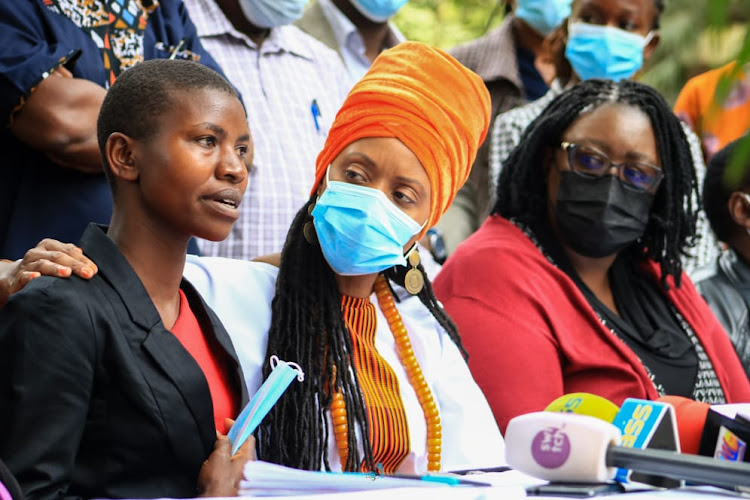 Three hacked to death on witchcraft allegations in Rabai

Grandchildren covered their faces in grief and wept when the Star visited.

Sindege’s death was gruesome. A photo capturing her last moments have become the postcard of the horror of  lynchings.

In the photo, she is seen raising her hands pleading for her life from a bloodthirsty mob as a man swings a panga at her neck.

One suspect was said to be a county driver who was not on duty on the day of the killings. It was not known where he was.

A man was said to have dragged Sindege from her bed, hacked her to death and set the body alight inside the compound of a nearby primary school.

"It is still too painful. It will take time for us to recover. I feel traumatised," relative Beatrice Chepkorirr said.

“The mob did not want to listen a she pleaded her innocence. . It was horrible seeing her being killed. I just can't get it out of my mind," she said.

“Our mum was never a witch. All along I had been with her, I never heard she ever left her house at night. It is all a cooked-up story,” she said.

The granny had been nursing a bruise on her leg  after a cow dragged her through a rough patch of the field.

“In fact, she never left the compound due that injury. How could she then run at night as they alleging?” she asked.

The family wants the man seen with  panga, the man who was standing near her, arrested for the murder.

The suspects  will return to court on October 29.
Counties
8 months ago

Not far away is the home of  Agnes Ototo who was  lynched as her family watched. They are numb with grief.

Ototo’s  daughter, Lydia Kerubo, said her mum was not a witch but she was an invalid who was mentally ill.

“We wonder at what point did she become a witch when all along she has been an invalid,” Kerubo said.

Two of her houses lay in ruins after the mob broke into the compound at dawn beating everyone in sight and ransacking the houses.

The family is awaiting an autopsy report before they can set a date for her funeral.

Kerubo said she could not have been involved in the abduction of the student. She was at home the whole night.

"This witch story is a total fabrication," she said.

Villagers said the four women were part of a coven of itches that lured the Nyagonyi secondary student away.

At least five suspects have  been arrested and four have  been arraigned in Kisii. One suspect was picked on Thursday as more are being sought.

Prosecutors said they would press murder charges against all suspects. At least 10 accomplices are on the run.

Kisi county police commander Francis Kooli told the Star  the pursuit for the remaining culprits would be "relentless until they are brought to face justice".

Activists in Kisii say 'witchcraft killings' have little to do with the abduction of the student and more to do with land feuds.

Many of those killed are defenceless widows who have nobody to speak for them, Lilian Marwa said.

“On the surface, it looks like it is about witchcraft, but deep down, you realise it is about land,” Marwa said.

"In a society where the majority of youth are idle, these killings point to a growing problem that must be quickly solved," he told the Star.

Inspector of Police Hillary Mutyambai has denounced the slaughter and ordered a "probe and arrest of the perpetrators".

He said there had been similar killings and justice is elusive for the victims' families.

Over 10 years, at least 30 people have been lynched on allegations of witchcraft in Kisii, police say.

More have been killed silently, made to look like a common murders and robberies," activist Wendo said.

Police say prosecution is difficult because many witnesses fear retribution and fail to testify.

“To end this madness, let our people come into the open and give evidence. Prosecution only builds a strong case against the suspects on the strength of evidence adduced by the witnesses,” a detective working on the Nyagonyi murders said,

Political leaders have condemned the lynchings

MP Jimmy Angwenyi whose constituency was  the location of the killings, turned them "tragic".

He asked residents to report suspects to the police rather than taking the law into their own hands.

Nyang’ate was among four elderly villagers who were executed by a mob over suspicion of witchcraft.
News
8 months ago

On October 17,  four elderly people from Marani were lynched on allegations of witchcraft
News
8 months ago

They describe the execution of elderly people in Kisii county a violation of human rights
Counties
8 months ago
by MAGATI OBEBO Correspondent, Kisii
Nyanza
22 October 2021 - 22:00