Kisumu West residents protest the abduction of their colleague

The man is said to have disappeared within the compound when he was bathing.

• According to the wife Jemimah Atieno, after taking water for his husband to the bathroom, he went to take a shower but was never to be seen again.

• The mother of three said being that her husband had earlier told her that his life was in danger, she looked for him everywhere until midnight. 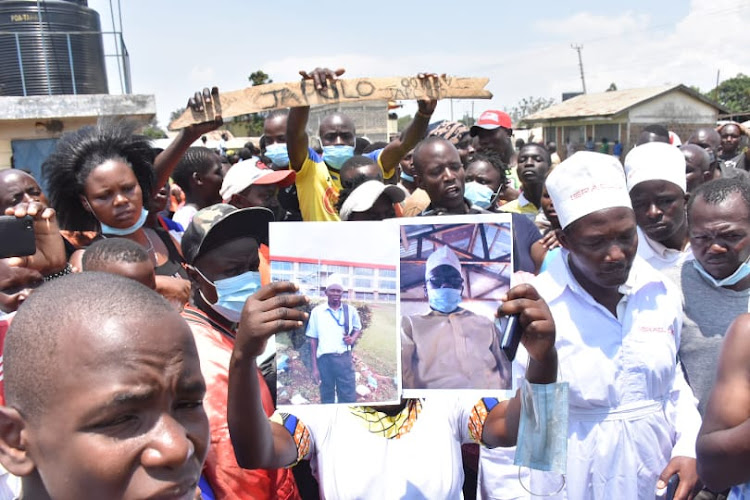 There was tension in the Kombedu area within the Kisumu West sub-county on Friday after residents took to the streets to demonstrate over a recent abduction of one of them.

The residents who engaged the police in running battle were demanding action to be taken to ensure that one Amos Ochieng can be found safe and alive.

Amos is said to have been abducted on Wednesday night within their compound where he was to take his bath.

According to the wife Jemimah Atieno, after taking water for his husband to the bathroom, he went to take a shower but was never to be seen again.

Atieno noted that when the husband took longer than expected, that's when he went to look for him only to realize that he had not even taken bath and he was nowhere to be found.

The mother of three said being that her husband had earlier told her that his life was in danger, she looked for him everywhere until midnight.

"The next day in the morning, I notified his friends what had transpired and together the matter was reported at the airport police station,” she said.

She claimed that her husband has been handling a sensitive matter concerning a grabbed market land within the area.

The locals took to the streets bringing a standstill to business within the area as police lobbed tear gas canisters to disperse them.

According to the locals, they have checked almost all the hospitals within the area but they can't trace him.

One of the businessmen Kevin Onyango noted that it is unfortunate that the incident happened to their chairman. (Chair Kombedu market) saying such a thing has never happened within the area.

Onyango stated that they want their chairman found alive and safe.

"We are telling the security agencies within the area including the chiefs to get out investigates the matter and tells us where he is and what's happening within the area", he said.

Ogada said, " This disappearance of Amos is among other cases we are witnessing in Kisumu and we want the security agencies to come out and tell us what is exactly going on".

He noted that as human right defender they have been documenting several kinds of cases.

Ogada further pleaded with the police to leave no stone unturned to ensure that Amos is found so that the family can get justice.