• The incident happened at around 7.30 pm involving a motor vehicle reg No. KCQ 067 Q pulling a fuel tanker Reg No. ZG 0687 make Scania driven by an unknown driver. 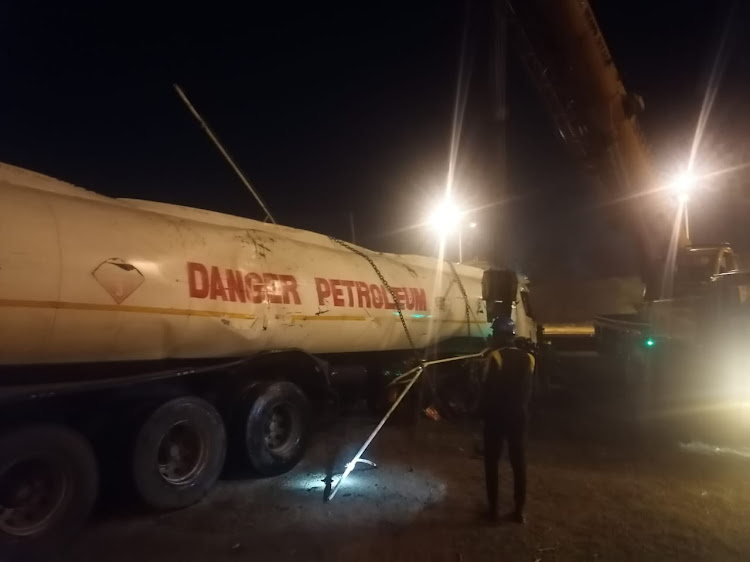 Police in Kisumu have retrieved an oil tanker that veered off the road at the Kasagam flyover /highway interchange along the Kisumu-Nairobi-Kondele highway and landed in a ditch on Monday night.

The police kept watch of the tanker all night to prevent members of the public from accessing the area where it had landed and siphoning fuel.

The incident happened at around 7.30 pm involving a motor vehicle reg No. KCQ 067 Q pulling a fuel tanker Reg No. ZG 0687 make Scania driven by an unknown driver.

The police rushed to the scene where they dispersed people and secured it.

According to the county commander Samuel Anampiu, the tanker which was carrying diesel fuel was coming from Kondele heading towards Ahero.

Anampiu said on reaching the scene of accident, it veered off the road and landed in a stream where most of the oil leaked into the river that drains into Lake Victoria.

“It was negotiating a sharp bend to join Kisumu City - Nairobi highway," he said.

The truck driver has not been found and efforts to trace him are in progress.

This comes following an accident in Malanga Village in Siaya county on Saturday that left 17 people dead.

A total of 25 survivors are receiving treatment from different facilities in Siaya county.