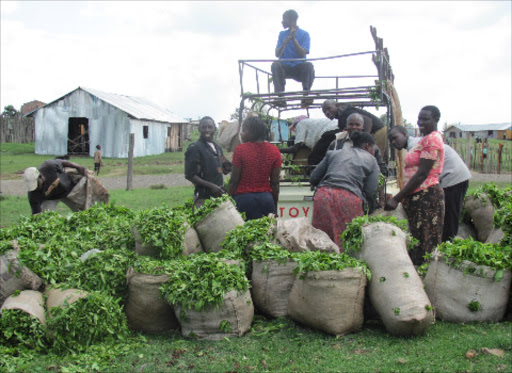 New directors in Kisii tea factories are still locked out of office two months after they were elected.

The directors accuse their predecessors of working in cahoots with factory unit managers to deny them access.

They have petitioned the government to kick out their predecessors.

"We came here and the unit manager said he will not meet us till he gets instructions from Nairobi. It is a difficult situation when we cannot talk to the factory management and get briefs," said Richard Obino, who was elected chairman of Kiamokama Tea Factory.

He spoke to journalists outside the factory after his team was denied access to the factory's offices.

Similar scenarios have played out in factories across Nyamira.

Farmers affiliated to all the six factories in the county held elections on April 3, 2021, but senior managers were said not to be available to receive the new office bearers.

In Kisii, the directors said cartels are determined to lock them out and continue running the show.

"It is a typical case of impunity fighting back and that is why we need help from the government, which initiated the reforms," Obino said.

Stephene Amisi, another director, said all they want is to restore the farmer's lost glory.

He said the rights of tea farmers must be respected.

"The farmers are angry and can evict everybody from here if they feel their decision in electing us is not being respected," Amisi said.

He said they have not been received any pay since their election.

"I don't think agitating for privileges is the right thing to do now. The focus, as it was captured when we campaigned for this seat, is to fight and restore the farmers' dignity," he said.

All the directors who turned up had to return home after failing to meet the unit manager.

They were however allowed access to the factory hall where they addressed journalists.

The factories, according to Agriculture CS Peter Munya, are to organise training and capacity building programmes on corporate governance for boards and orienting the new directors.

The elections, Munya said, were the first step in the journey towards redeeming the smallholder tea sub-sector.

He asked the new leaders to make a difference going forward.

“It is instructive that you have been elected on the platform of change and reforms for the tea industry,” Munya told the new directors in a recent meeting.

Elections were held following the March 12 executive order directing the Tea Board of Kenya to sanction polls in all tea factories.

The High Court in Nairobi however suspended the order, saying some of the issues raised had been raised in another application filed by the Attorney General last year seeking to stop the polls.

Justice Anthony Mrima said suspension orders issued by the High Court in Mombasa stopping the elections were still in force.