Party writes to IEBC in protest, says administrators being used in favour of Jubilee candidate 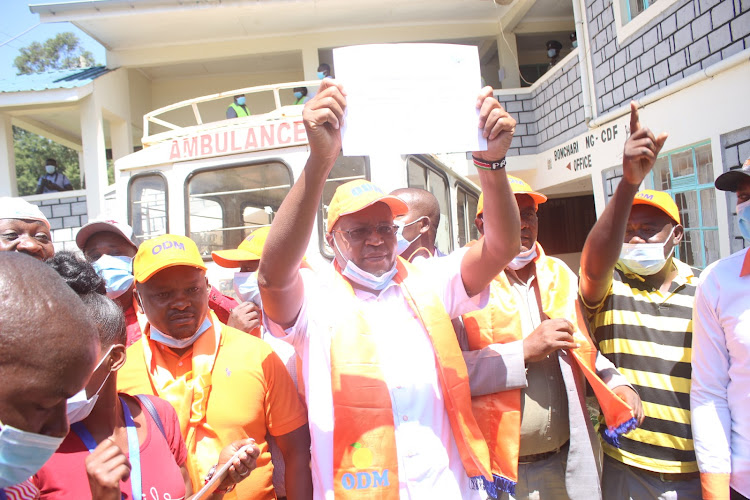 The Orange Democratic Movement party has protested to IEBC over alleged misuse of state agencies to campaign for a candidate in the Bonchari parliamentary by-election scheduled for May 18.

The party claimed there were calculated, planned and executed activities by a section of state agencies with the aim of influencing the poll in favour of the candidate.

Such a move undermines what is expected to be a free, fair and democratic electoral process, the party said.

Ong’wen cited a recent meeting where Opore addressed chiefs and their assistants at Kerina while dressed in Jubilee party colours.

“One wonders what the agenda of the meeting was and why only one candidate was invited to attend and address the chiefs to the exclusion of others,” the letter reads.

Ong'wen said the arrest was part of a scheme to provoke and intimidate the ODM campaign team and their supporters. The MCA was charged with assaulting the administrator before being released on Sh30,000 bail.

“The brazen attitude and conduct of public officers only reinforce what many locals have intimated to be an endorsement by a senior public officer in the Ministry of Interior and elements within the National Police Service who are actively engaged in these by-election campaigns,” Ong'wen said.

ODM has also protested against plans to move the tallying center from Suneka Baraza Hall to Igonga Secondary School.

The party said the school is not a gazetted tallying centre and is within the home area and location of one of the candidates.

“Why the sudden change midstream of an electoral process without consulting the relevant stakeholders. It is not lost for us that some of these incidents occurred recently in Matungu and the commission refused to act on similar complaints,” Ong’wen's letter to Chebukati reads.

The by-election has attracted 13 candidates including three women contestants. Former Energy and Petroleum Regulatory Authority MD Pavel Oimeke is flying the ODM flag in the by-election.

The seat fell vacant after MP John Oroo Oyioka died in February. His widow Teresa Bitutu are among those seeking to succeed him.