• Oloo was killed in the house of former Ugunja deputy OCS Sabina Kerubo in 2019 in unclear circumstances.

• Kerubo who was the state witness in the murder case of Oloo died in Nairobi early this year. 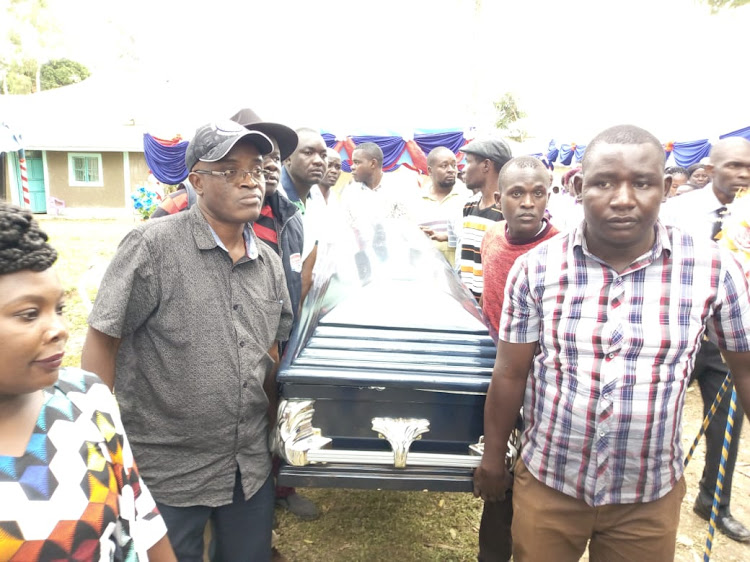 Eric Oloo's body being escorted to the grave in Ugunja where he was laid to rest in 2019.
Image: FILE

The High Court in Siaya has sentenced Joel Ogolla Luta to 35 years in prison after finding him guilty of the murder of former Star newspaper journalist Eric Oloo.

Oloo was killed in the house of former Ugunja deputy OCS Sabina Kerubo in 2019 in unclear circumstances.

Kerubo who was the state witness in the murder case of Oloo died in Nairobi early this year.

The judgement was made on Wednesday by Lady justice Roseline Aburili who indicated that the judgement for murder is death but because of the surrounding circumstances 35 years in prison for Luta was prudent.

Justice Aburil said the victims testimony and the evidence at hand were more than enough to convict Luta and especially after asking for forgiveness from Oloo's family.

The judge recalled how previously the suspect had denied the charges but during the proceedings he accepted the charges and pleaded for forgiveness.

The judge said the accused was guilty of murder contrary to section 203 of the penal code.

The court also found that the suspect was not a first time offender based on the records from Ukwala law courts and the probation office.

The probation office established that the offender had been charged in Ukwala law court in 2018 for causing a disturbance.

The probation office also indicated that the accused Luta was a habitual offender.

The judge told the court that Luta was found guilty after a one year investigation.

The judge also mentioned that she had intended to charge Kerubo but she died.

"No one is entitled to eliminate once life and just say sorry after causing such a loss to the deceased's family," Aburili said.

Aburili told the accused that he is free to appeal the judgement within 14 days.

However, the accused pleaded for leniency telling the court that he has a young family who fully depend on him.

Luta added that his mother is also not in good health and he was supposed to take care of her.