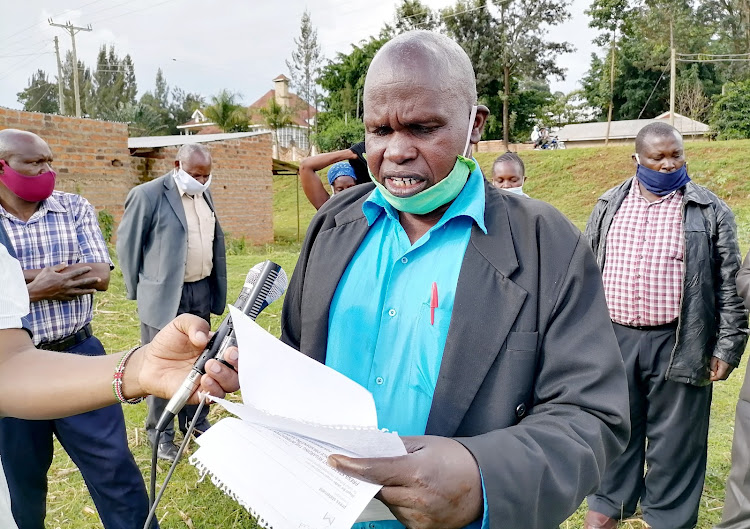 The sacking of a Seventh-day Adventist pastor in Kisii last week is threatening to tear apart the church in the region.

South Kenya Conference president Julius Bichanga was sacked days after a court in Ogembo absolved him in a child neglect case.

On Monday, some elders from Bobasi led by James Irera and Ann Moenga threatened to move churches in Bobasi to the breakaway Nairobi Cosmopolitan Conference.

They accused the conference of playing dirty games, saying they suspect malice since the interdiction comes two months to elections.

The elders protested the "dirty games that play out every time elections to pick new leaders draw near".

They said three leaders from the area who have served as conference presidents, like Bichanga, have been sacked in controversial circumstances.

The conference controls more than 600 churches and Sabbath Schools.

Bichanga was sent packing last Monday after he won a case filed by some pastors he had sacked for allegedly embezzling tithes and offerings from their districts.

The case has been thrown out five times. The plaintiffs insist the cleric sired a child out of wedlock while serving at a church in Nyamache.

According to church documents, the plaintiffs allegedly misappropriated more than Sh2.3 million before they were interdicted.

Church officials in Nyanchwa, the conference headquarters, were on Monday hesitant to provide details on Bichanga's interdiction.

They instead referred the Star to Bichanga who also declined to comment.

"I am still a member of the church and its policy does not allow me to talk to you," he told the Star on the phone.

He however acknowledged receiving a letter from the East African Union, headed by Pr Samuel Makori, asking him to step aside.

Some leaders at the conference however told the Star his downfall began when he invited Deputy President William Ruto to a fundraiser for the multimillion-shilling Nyanchwa conference office.

Some leaders were uncomfortable with inviting the DP, who donated Sh11 million towards the construction to the chagrin of some political actors in Nairobi who wanted donations to come from quarters leaning towards State House, the sources said.

At least Sh90 million has been sunk into the project, which is almost complete.

A pastor who did not want to be named accused some senior government officials of blocking Bichanga from seeing the President who had already committed to the cause.

He said an official was furious when he found Bichanga at the lobby in the State House waiting to see the President.

On Monday the elders said high-level sackings will polarise the church further and called for better solutions to problems at the conference.

"As elders we are not happy. It is time for the church leaders to work together or we shift to Nairobi Cosmopolitan Conference where we are seeing some semblance of order," they said in a statement.

Irera faulted the union leadership for relying on rumours and lies to fire leaders. "If the court absolved him, then why go ahead to tell him to step aside?" he asked.

They said Bichanga has improved the church's welfare.

"Under his leadership, we have grown in membership and many of our health facilities have significantly improved. With all these achievements and the election being around the corner, we suspect malice," Irera said.

He called for reforms in the church.

"The conference has been reduced to a theatre of the absurd where pastors are either scheming or scrambling for leadership positions instead of leading the flock," the elders said.

In Kisii, the elders now want Bichanga reinstated. They gave the union two weeks to do so.

Last week, a court in Kilgoris, Narok county, ruled in NCC's favour to take over the management of a number of rebel churches in Transmara West.

The churches had initially been placed under the South East Conference when they opted to break away in January to join the NCC.

Post a comment
WATCH: The latest videos from the Star
by MAGATI OBEBO Correspondent, Kisii
Nyanza
15 June 2020 - 22:00
Read The E-Paper