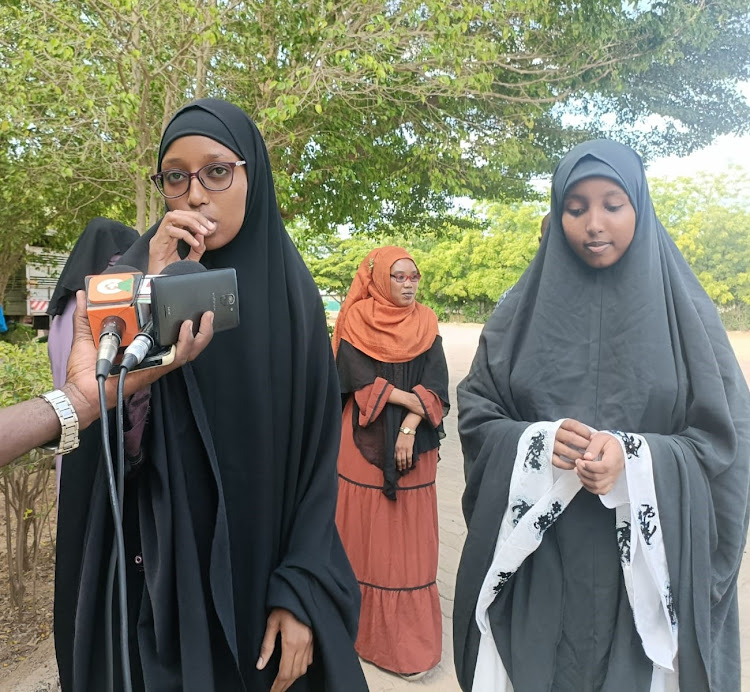 Zahara Dagane a former student of Manara girls high school in Garissa. she scored a B +.
Image: STEPHEN ASTARIKO

It was another celebrations galore for girls at Mnara school in Garissa after outshining  their boys counterparts in in the 2022 KCSE results.

The learning institution  that  that has both separate boys and girls schools has over the years produced sterling performances.

However, in most cases it is the girls who performed way better than their boys counterparts.

Just like last year where leading girl students from the region came from the school, this year was no different.

Three girls from the institution were among the best in a region where girl child education and performance is still wanting.

Zahara Dagane, Samira Hassan  and Idhil Ilyas scored B+ of 69 ,68 and 67 points respectively.

Speaking to the press at the school compound where they had joined the school fraternity in celebrating their performance, the three attributed their success to hard work, discipline and the cooperation they received from the teachers and guardians. 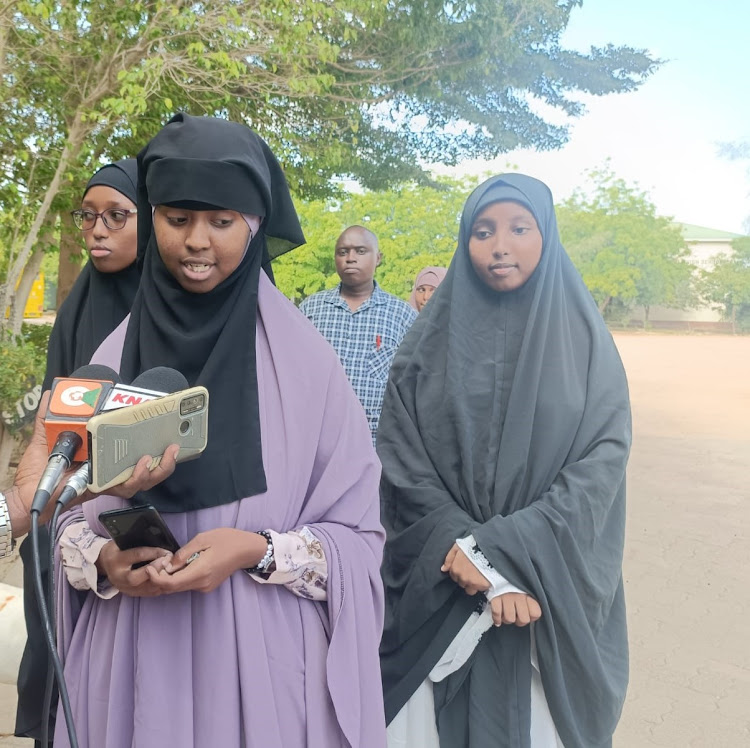 Samira Hassan speaking to the press at Mnara gilrs high school. she scored a B+ and wants to pursue a course in teaching.
Image: STEPHEN ASTARIKO

Zahara Dagane said that the results did not come as a surprise to her as several people including her teachers, fellow students,  parents and siblings were very instrumental in her achievements.

“Honestly high school has been tough. It has not been easy at all. I had to work extra hours, sometimes sleeping for very few hours just to make sure that I try and improve in some of of the subjects like Mathematics s and languages that were giving me a lot of nightmares,” she said.

Zahara,17 who wants to pursue a course in medicine said that she was contended with her grade saying that she believed it was enough to earn her a place at the university to pursue her dream career.

On her part Idhil equally said that she was elated by her grades saying that she expected the results considering the kind of effort she put in in her studies.

Idil who also wants to pursue medicine said that she has always been motivated to serve the society and specifically the sick. 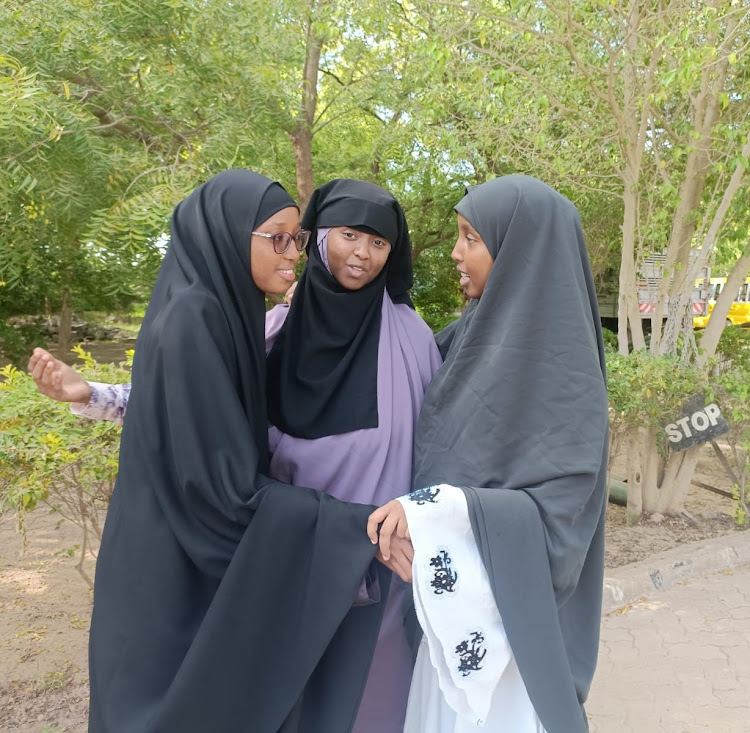 from left Zahara Dagane,Samira Hassan and Idhil Ilyas scored B+ of 69 ,68 and 67 points respectively congratulate each other at Mnara girls girls high school in Garissa.
Image: STEPHEN ASTARIKO

“Since I was young I have always wanted to be a doctor and now that I have a good grade that will will get me a chance to study my dream course, I am very happy.. so yes I  continue to grind on as hope for the best and pray that God gives me good health,” she said.

Samira on her part said that all she wants to pursue a course in teaching noting she always wanted to be teacher since when she was a child.

She regretted that the region was suffering from lack of teachers yet not many form four leavers want to pursue a course in teaching.

This situation, she said, will continue that way unless locals embrace the noble course.

“Most of our people don’t like pursuing teaching as they think its is a course for those who don’t have good grades or those who fail but I would like to correct that poor notion and mentality. We are all where we are because of the teachers,” he said.

Most preferred school, Kabianga drops in this year's results

Teachers had protested delayed pay and poor working conditions during the marking of KCSE.
News
6 days ago

How to check 2022 KCSE exam results

The SMS platform is available for all mobile networks.
News
6 days ago
Post a comment
WATCH: The latest videos from the Star
by STEPHEN ASTARIKO Correspondent, North Eastern
North Eastern
21 January 2023 - 11:46
Read The E-Paper