In past elections, the market was torched after announcement of results

•The market is situated next to the Garissa library, which was the tallying centre in 2017.

•At the same time, voting in Eldas constituency began on Wednesday, following a failure on Tuesday. 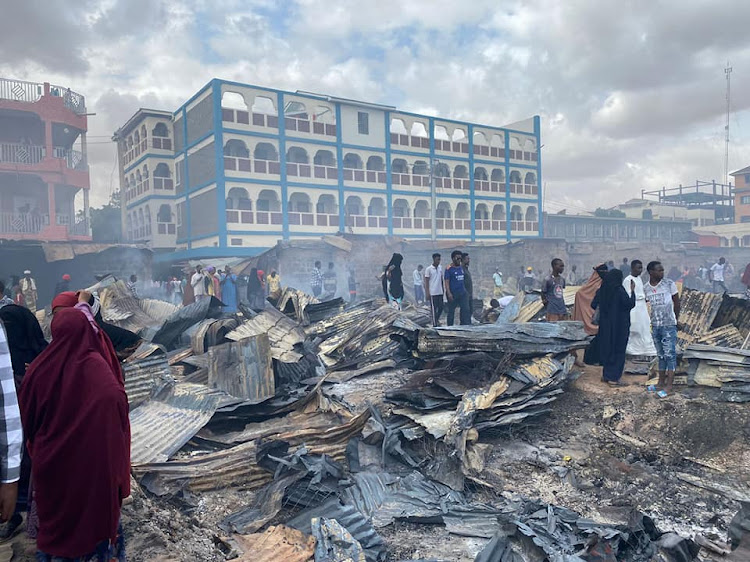 The Garissa market was razed on June 23. Security has been beefed up at the market.
Image: File

Police in Garissa have heightened security around Garissa University, the regional tallying centre.

There is also heavy police presence around Suq Mugdi Market, which has often been targeted for arson during elections.

Contingents of security officers were on Wednesday deployed at the gate of the university only letting those accredited by the Independent Electoral and Boundaries Commission into the premises.

Northeastern Regional coordinator James Kianda told journalists they are not taking chances to ensure all important installations are secured.

“We are not taking chances this time, we will provide maximum security during and after voting, I urge our people to vote and wait the results at their homes,” he said.

In past elections, the market has sometimes been targeted for arson after the announcement of results.

In 2017, immediately after gubernatorial results were announced, the market went up in flames with traders losing products worth millions of shillings.

The market is situated next to the Garissa library, which was the tallying centre in 2017.

Sources said the tallying centre was moved from the library to Garissa University because the university is more secure.

At the same time, voting in Eldas constituency began on Wednesday, following a failure on Tuesday.

Chaos erupted at the Eldas tallying centre on Monday night, leading to lighting of a fire outside the facility, with some individuals threatening to burn electoral materials. It is not yet clear who started the fire.

Gunshots rendered the air for the better part of Monday night as the police engaged the supporters of the two candidates in running battles.

Tension arose after it was alleged that some presiding officers and their deputies were planning to rig the polls.

By 1pm on Tuesday, voting had not yet started as tension remained high with the voting materials still locked.

"It's a normal day here in Eldas, nothing is going on because of the tension and standoff. We can only hope and pray that an amicable solution is found so that this very important exercise can start,"an officer told the Star earlier yesterday.

A senior security official blamed the IEBC for the standoff and distanced the security apparatus from the chaos.

“That is purely an IEBC matter and they should put their house in order. From our side, we have provided the required security. We hope and pray that an amicable solution is found soon,” he said.

But in a press briefing in Nairobi, commissioner Boya Molu distanced the IEBC from the incident terming it a security issue.

“Suspected militias have taken over and are fighting each other. We have sent a team from the commission to Wajir to try and sort out the issue," Molu said.

"So that voting can start later today or tomorrow, but we will give an update later."