Over 5,000 small-scale traders have been affected

MILLIONS IN LOSES: Traders at the Garissa market asses the damage caused by the early morning inferno on Thursday, June 23.
Image: STEPHEN ASTARIKO

Traders at the Garissa open air market commonly referred to as suq mukti are counting millions in losses following a fire incident.

The market was reduced to ashes in the Thursday morning fire.

It is not clear what ignited the fire, which started at 2am.

While some attributed it to an electric fault from one of the shops, others said it was started out of malice.

Traders and residents said this is the fifth time the market has burnt.

When the press visited the market, desperate traders were trying to salvage the situation, which was already out of control.

Trader Fatuma Roble who sells groceries was in tears while narrating how she has lost all her stock.

RAZED DOWN: Former Garissa governor Nathif Jama assesses the destruction that was caused by an inferno at the Garissa market on Thursday, June 23.
Image: STEPHEN ASTARIKO

“I don’t have words to explain the loss, it is painful. All my groceries and cereals amounting to millions, have burnt to ashes. I just don’t know where to start because this business was my lifeline,” she said.

Roble said both the national and county governments seem not determined to put an end to the recurrent fires.

"What is the purpose of the Garissa fire station if it can’t help the people. Where are the millions budgeted for this department every financial year? Where are all these fire engines and firefighters? What happened to them?" she asked.

Another trader Abdi Hassan who runs an electronic shop blamed the county government for not responding fast, to put out the fire.

“We have a county government that is very unresponsive to the needs of its people, yet we pay taxes. A market within town burns, yet not a single fire engine showed up. Someone must be held responsible for this loss,” he said.

A fire engine driver who spoke in confidence said all six vehicles have been grounded for a while, due to mechanical problems.

Resident Hassan Sheikh Ali said it is unfortunate that the market has a history of being razed down every election year.

He said the authorities should thoroughly investigate the root cause of the fires.

Garissa Township MP Aden Duale called on the investigative agencies to carry a thorough probe into the incident.

He said the watchmen guarding the market should be the first to be arrested and interrogated. 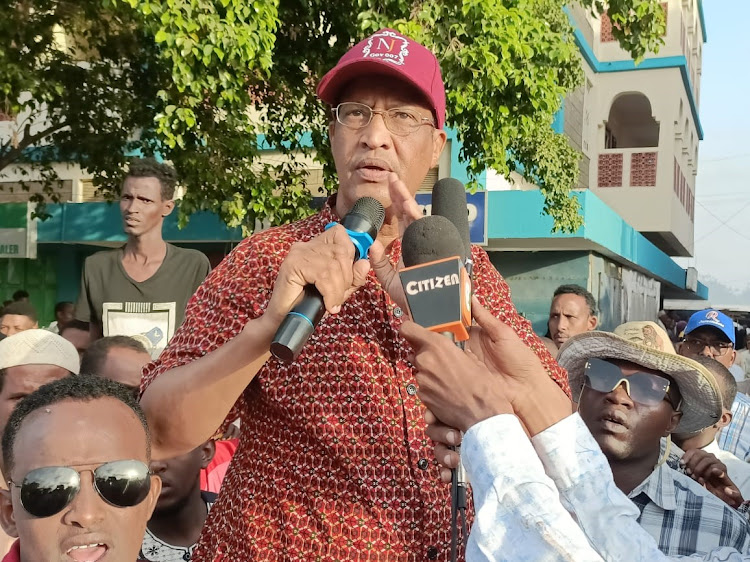 Former Garissa governor Nathif Jama who was among the first leaders to visit the market in the morning regretted the turn of events.

He however blamed the current Garissa administration for doing nothing to put the fire out.

“It is regrettable that all the fire engines, which were operating when I left, have been grounded. Not a single vehicle is operational, surely did it have to get to this level?” Jama posed.

The ODM Garissa governor candidate said hundreds of thousands of families eke a living as small-scale traders at the market.

“The fire comes when the people are still reeling from the effects of the Covid-19 pandemic and the ravaging drought,” he said.

Jama called on the police to carry out investigations to ascertain what caused the fire.

Garissa OCPD James Ng'etich said they have launched investigations into the matter.

He said police are interrogating the guards as well as Kenya Power officials, to establish the cause of the fire.

The cause of the Monday 3 pm fire is yet to be established.
Counties
3 weeks ago

Not again! Millions of shillings go up in smoke in Gikomba

Musyoka said she has been doing business in the market since 2003.
Counties
3 weeks ago
“WATCH: The latest videos from the Star”
by STEPHEN ASTARIKO Correspondent, North Eastern
North Eastern
23 June 2022 - 22:00