NRT had been linked to extrajudicial killings, disappearances, theft of land and denial of access to grazing zones

• “This DDR [due diligence report] has not found evidence to support any of the alleged killings or “fueling conflict” allegations in the Oakland report,” the report said.

• NRT is a membership organisation owned and led by the 43 community conservancies it serves in northern and coastal Kenya. 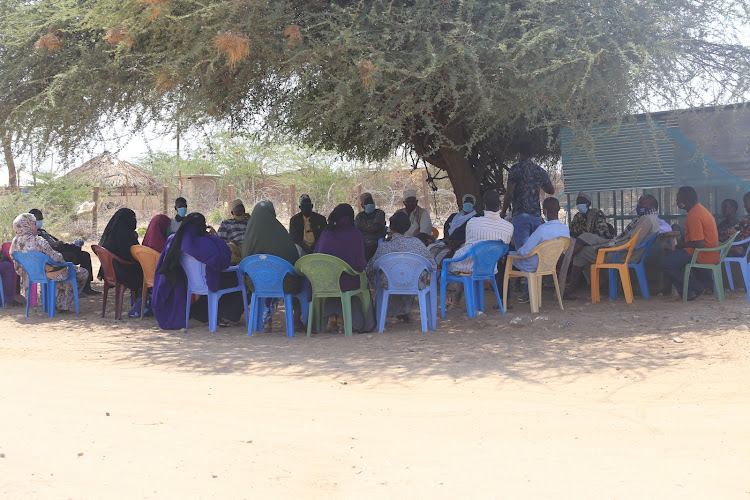 DUE DILIGENCE: Elders and professionals from the Borana community meet in Merti to consult about proposed new conservancies.
Image: SHISIA WASILWA

A report has absolved the Northern Rangelands Trust of allegations of human rights abuses.

NRT had been linked to extrajudicial killings, disappearances, abuse, theft of land and denial of access to grazing zones.

The Oakland report accused NRT of abuse of human rights, which the trust vehemently denied.

NRT was founded in 2004 as a non-profit organisation to promote the establishment of community-led conservation initiatives.

Today, there are hundreds of community conservancies across Kenya, formed under the Wildlife Conservation and Management Act of 2013.

Following the grave allegations, six of NRT's main donors, including The Nature Conservancy,commissioned an independent report by a Kenyan indigenous rights specialist to investigate the Oakland claims.

NRT receives funding and support from a range of sources such as USAID, the European Union, the Danish International Development Agency, Agence Française de Développement and the Fonds Français pour l'Environnement Mondial.

In February, a due diligence advisory team was assembled and retained before a situational analysis and investigative fieldwork was conducted from March to May.

The report, which is set to be released on Thursday, concluded that there was no evidence to suggest that the grave allegations were true.

“This DDR [due diligence report] has not found evidence to support any of the alleged killings or “fueling conflict” allegations in the Oakland report,” the report said.

The terms of reference of the due diligence report recommend “human rights due diligence” steps and other measures and actions that might be taken, to more fully understand the context of the allegations and fulfill the various parties’ ongoing responsibilities to respect human rights.

The report also said it did not find any evidence to support any of the specific allegations of corruption or improper use of influence contained in the Oakland report.

“NRT does have influence. Especially in light of prevailing social conditions, it has immense wealth and commensurate power to achieve its goals.

"This fact co-exists with the substantial evidence that NRT directs its conduct to achieve public interest outcomes and to support community members, even when it deals with them in a commercial capacity such as in livestock sales.”

The report said communities, even critics in the Biliqo Bulesa, appreciate the projects funded by NRT and seek more.

It further said it did not find any evidence to support the specific allegations or generalised suggestions of community loss of land or access to land contained in the Oakland report.

The report said it failed to find evidence to support the claims that conservancies are undermining Borana’s Dheda grazing management system, although certainly, the emergence of conservancies has had a range of impacts.

The overall findings of the report are that, despite four months of work and extensive field research, including going to places that Oakland went to and talking to people they did, the Due Diligence Report team could find no evidence to substantiate any of the key allegations by Oakland.

To ensure independence, the report said, a highly respected author -Dr Kanyinke Sena-worked independently of TNC and the other NRT donors who commissioned the report.

However, the report did identify a need for NRT to standardise how it makes sure that it is conscious of the impacts of its work on people's human rights, with a transparent and structured process informed by a fuller understanding of the impact of its activities.

The report urged donors to continue funding NRT’s activities saying its presence does not devastate the land and lives of the local community, however, the abrupt withdrawal of NRT would certainly do so.

The report said the ongoing registration of community lands provides a great opportunity for merging the community-based approach epitomised by the community conservancy model, with the governance authority needed when many of the complex issues raised by land management are encountered.

“NRT should prioritise working with communities, conservancies, and the county and national government to accelerate land registration processes, especially in Isiolo county,” it said.

When Lipan Kitonga saw 35 of his 121 goats and sheep that had been stolen after a raid by the Samburu community being returned, he could not believe ...
News
5 years ago