Some 120 guns and 1,300 rounds of ammunition have been recovered from the public 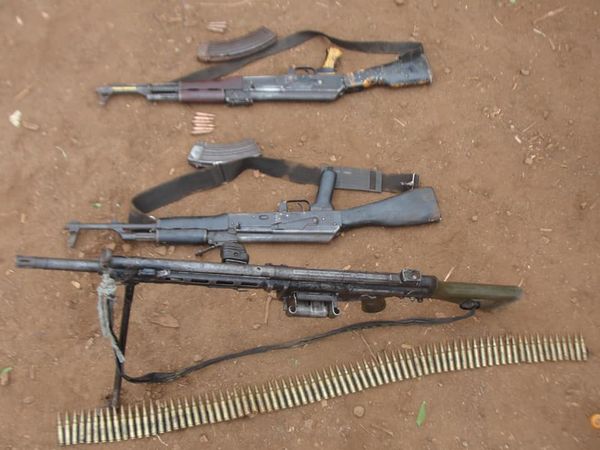 DISARMAMENT: Some of the weapons recovered on Tuesday, May 31 in the Marsabit operation.
Image: NPS

The dusk to dawn security curfew in Marsabit has been extended by 30 days.

This follows the lapse of the 30-day curfew that started on May 2.

“There shall be no public gatherings, procession or movement either alone or as a group during the curfew period, except as has been permitted in writing by the Inspector General of the National Police Service,” he said in a special gazette notice.

However, the notice did not include Kom Durte in Isiolo county as the earlier one.

Mbatha had steered a security operation in Laikipia last year and was redeployed to Marsabit county for a similar mission.

The operation aims at restoring peace and security in the region and neighbouring Isiolo county.

The Marsabit operation has progressed according to plan and police say there have been no attacks as in the past months.

Despite some residents protesting harassment by police, some have lauded it saying it has resorted security.

They recovered four carbine rifles, a G3 rifle, an AK-47 rifle, one magazine and 13 rounds of assorted ammunitions from assistant chiefs of Demo, Bubisa and Shurr.

In Jaldesa, officials surrendered one carbine rifle, an AK-47 rifle with one magazine and 20 rounds of ammunition.

Some 120 guns and 1,300 rounds of ammunition among other crude weapons have been recovered from the public.

The recoveries were made in various subcounties in Marsabit during the month-long exercise.

Police and administrative officers in the operation agreed to sustain awareness forums aimed at urging residents to voluntarily surrender arms.

They say the operation is not meant to target any community but to fish out criminals in the entire county.

More than 50 suspects are facing various charges in connection with the recoveries made so far and killings that have happened in the area.

The operation is being led by special forces drawn from the GSU, the Rapid Deployment Unit, the Quick Response Unit and the Anti-Stock Theft Unit.

Matiang'i said the operation will run in tandem with disarmament targeting illegal guns and bullets.

The CS said the assailants defied peace initiatives, including the lapse of the 30-day window sought by county leaders to secure reconciliation.

The animosity between the Borana and Gabra communities has progressively boiled over and Matiang’i has expressed concerns over political leaders who have frustrated previous attempts to pacify them.

He said rival groups have been armed and transformed into competitive political militias, meting out violence on innocent civilians.

Matiang'i said the result is a costly security challenge.

A security operation is ongoing in the area to flush out criminals hiding in the mines.
News
8 months ago

19 people allegedly assaulted by police as they received food aid.
Counties
8 months ago