Together with his deputy James Lowasa, they pledged to unite all communities if elected.

•Clan alignment,  political party and development track records are among issues likely to be used to get support from various communities.

•Isiolo which is estimated to have 280,000 people according to IEBC, enjoys unique diversity, hosting almost all the 43 tribes in Kenya.

Isiolo governor aspirant Abdi Hassan Guyo has urged voters to reject tribal politics and bank on him for better leadership.

Guyo and his deputy James Lowasa pledged to unite all Isiolo communities if elected.

They have been spreading peace and inclusivity messages.

“Tribalism will not be an issue under my leadership. Isiolo is home to many communities, everyone will be treated equally,” Guyo said.

“The community will prosper when there is peace. This is a time for change and a new dawn for the Isiolo people. We will bring the change you need,” Lowasa said.

The two spoke on Saturday at a rally in Imenti Central, Isiolo.

Clan alignment,  political party and development track records are among issues likely to be used to get support from various communities.

Isiolo which is estimated to have 280,000 people according to IEBC, enjoys unique diversity, hosting almost all the 43 tribes in Kenya.

Others are Kenneth Ntoribo (PNU) and Machugoma from Ford Kenya. 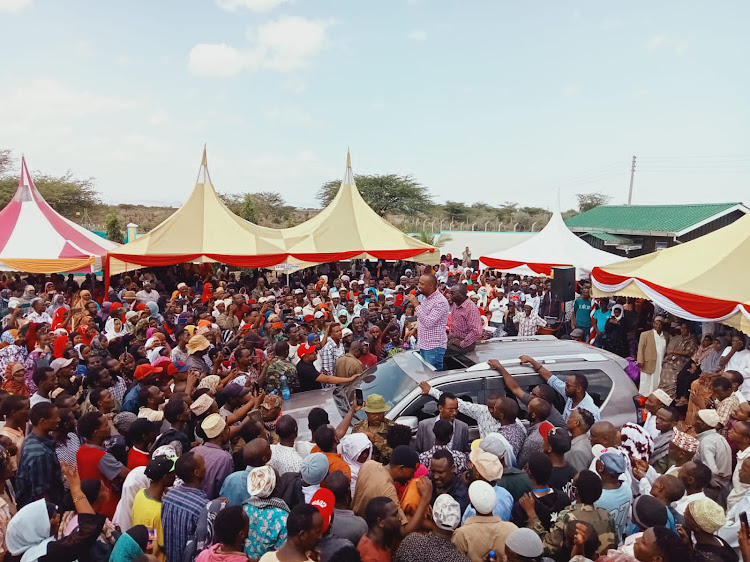 Isiolo governor aspirant Abdi Hassan Guyo and his running mate James Lowasa at a rally on May 21 in Isiolo.
Image: MAUREEN KINYANJUI

Banking on his track record in Nairobi, Guyo said he was ready and capable of leading Isiolo.

He is currently the Matopeni MCA and the Nairobi county assembly Majority leader.

Guyo said he had been elected from 2007 to 2017, and nothing would hinder him from leading Isiolo.

“I have been in leadership for 15 years. I have never been chased out of the government or lost a battle. If given this opportunity, you will not regret it,” he said.

Pastoral conflicts and clashes have been a major menace in Isiolo often leading to deaths.

Pastoralists have been taking their camels, herds and goats for grazing but in fear of being attacked

However, the governor hopeful pledged to transform Isiolo into a safe place free from clashes, where people would freely herd without fear of being attacked.

“My administration will deal with security issues and no single camel or goat will be stolen. I will ensure that together with the national government, security officers will be deployed in prone areas,” Guyo said.

The two pledged to address land ownership by making sure Isiolo Central residents will get their title deeds during their first year of leadership.

This, they said, will end displacement threats.

“Our government will ensure that people get the documents and land grabbers will have no space in Isiolo,” Guyo said.

The hopefuls pledged to work closely with the national government to ensure the Isiolo-Merti road is rehabilitated to good standards.

Guyo has promised the locals that his government will represent all communities.
Counties
2 months ago

The Nairobi majority leader became a top contender after he was endorsed by Governor Mohamed Kuti.
Counties
2 months ago
“WATCH: The latest videos from the Star”
by MAUREEN KINYANJUI News Reporter
North Eastern
22 May 2022 - 22:00